Novak Djokovic out of US Open with injury 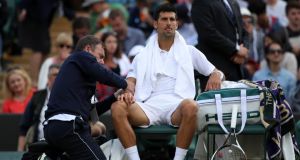 Novak Djokovic is given treatment during his Wimbledon quarter-final. Photo: Julian Finney/Getty Images

Novak Djokovic is set to miss the US Open after one of his doctors indicated he will need six to 12 weeks to recover from an elbow injury.

But Andy Murray’s chances of playing at Flushing Meadows would appear more positive, with the Scot continuing his rehabilitation from a hip problem.

The last grand slam of the year starts in just under five weeks on August 28, meaning Djokovic will run out of time if the latest assessment is correct.

The 12-time major champion was forced to retire injured during his Wimbledon quarter-final against Tomas Berdych earlier this month and said after the match he had been feeling pain in his right elbow for over a year and a half.

He has since been seeking advice from specialists, including Serbian doctor Zdenko Milinkovic, who said Djokovic is suffering from a “bruised bone due to excessive playing”.

“Nole must rest for six to 12 weeks,” Milinkovic told Sportski Zurnal, a sports newspaper in Serbia.

“The next examination will know whether this assessment stays or changes. During this period, he will not train with a racket but he will run other sessions, such as fitness and the like. Of course there will be certain therapies.

“The symptoms have calmed down, he was with a specialist at Toronto for additional tests. He also consulted our experts of course because we are great friends.

“Now it’s important to rest with different types of procedures that can affect recovery. Surgery remains the last option.”

If Djokovic does sit out the trip to New York, it will end his run of 51 consecutive appearances at grand slams and mean dropping further down the world rankings.

He is currently placed fourth but is already due to slip to fifth when the list updates on Monday.

Murray’s Wimbledon hopes were also hampered by injury as he limped to a five-set defeat against American Sam Querrey.

The world number one, however, looks to be feeling more positive about his troublesome hip after posting an Instagram video on Monday of him hitting balls against a practice wall.

“Which opponent has no weakness, never misses and has never lost? #the wall”, Murray wrote.

The 30-year-old also posted a photo last week of himself and his physio Shane Annun during a rehab session at a swimming pool.

Murray is due to play at the Canadian Open, which starts on August 7, and then the Cincinnati Masters before the start of the US Open.

1 Tour de France: Every yellow jersey winner must feel guilty by some association
2 Sam Bennett: ‘A green jersey in the Tour de France is such a highlight of my career’
3 Kevin Babington: Learning to live again after life changed forever on Long Island
4 Man City agree €55m fee for Benfica’s Rúben Dias
5 Matt Williams: The sky is not falling in on Irish rugby - but Ireland do need a new plan
Real news has value SUBSCRIBE