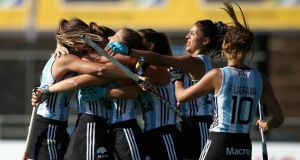 The front door to World Cup qualification closed for Ireland’s women but coach Graham Shaw says the confidence gleaned from a narrow 2-1 loss to world number three side Argentina can serve them well for an assault via the back door.

Shaw’s charges upset Las Leonas’ rhythm for long periods to give themselves a shot at a shock result down the closing stretch, making things difficult at most turns. As it was, Shaw was left to reflect on a cautious first half.

“We started a little tentative and allowed them to control too many phases in the first half,” he said afterwards. “The second half was a lot better and we put them under a lot more pressure as a result. We are very confident going into the playoffs and looking forward to the challenge”.

It was the second successive game that his side had come close to shocking one of the world’s top sides, coming two days after the Olympic champions - in their England guise – edged out Ireland 3-2.

For the first 25 minutes, Ireland put in a strong defensive performance with Shirley McCay and Zoe Wilson leading the troops, barricading the edge of their circle.

Argentina, though, are one of world hockey’s leading lights and is the country’s biggest women’s and they eventually pounced on a pair of lapses in quick succession allowed them to take the lead.

Nicci Daly struggled to control a bouncing ball and Maria Ortiz stole in, her pass finding Delfina Merino whose turn wrong-footed both Yvonne O’Byrne and goalkeeper Ayeisha McFerran who had over-committed. It left a simple finish on her backhand for 1-0.

The second half followed a similar pattern with Argentina controlling the play, pinning Ireland back. Their lead was doubled in the 40th minute from the first penalty corner of the game, Julia Gomes picking a low line to the backboard.

It drew Ireland quickly out of their shell and they struck back in brilliant fashion, Upton scoring from Ireland’s first shot in anger. She nailed a drag-flick from a corner won by Anna O’Flanagan’s willing run down the right.

O’Flanagan won another corner with six minutes to go to give Ireland a major chance to equalise but this time, Upton’s shot was charged down.

Shaw swapped out goalkeeper McFerran after that in favour of an extra outfielder in an all-out bid to grab an equaliser and a shoot-out chance but Argentina held firm to take the narrow win.

The team have a second chance this week at qualifying with wins in the fifth to eighth place playoffs likely to earn a spot too. Officially, fifth is the only guaranteed place but the list of qualifiers to date now suggests that even a seventh place is more than likely to land a ticket to London 2018.

That series starts with a tie against South Africa on Thursday with India and Japan the other sides involved in these classification ties.

Wednesday is the men’s turn as they face Spain at 12.30pm (Irish time) in the same quarter-final scenario with victory bringing a ticket to a World Cup for the first time since 1990.