Cross-country course takes its toll on teams in Millstreet 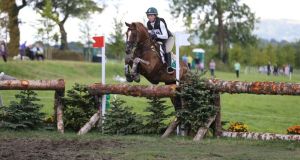 Ireland’s Susie Berry in action during the cross-country at Millstreet on Saturday.

The Gain Irish teams were both lying fourth going into Sunday’s concluding show jumping phase of the FEI European eventing championships for young riders and juniors in Millstreet, Co Cork, with Susie Berry in the silver medal position in the young riders’ section.

However, at this morning’s second horse inspection her mount, Susie Woods’s nine-year-old Ricardo Z gelding Morswood, was held over on his first appearance before the ground jury and then not accepted. As Tessa Harley had to withdraw Catsky before cross-country on Saturday, Ireland is no longer in a position to win a medal.

While heavy rain did its best to dampen spirits over two days of dressage in the Green Glens Arena, the weather across the road in Drishane Castle on Saturday was in complete contrast with the sun making a very welcome appearance, displaying the venue and wonderfully constructed fences to advantage.

The young riders’ two-star track caused plenty of problems which were spread out around the course. All teams were reduced to three riders each with Germany now leading on a penalty score of 125.70 ahead of the Netherlands (127.90) and Britain (142.30).

Britain’s Sam Ecroyd, who led after dressage, was eliminated with his mount, the Irish-bred Tullaher Sunrise, ducked out at the Red Mills water cascade rail in the second water (fence eight). This left Germany’s Hanna Knüppel in the lead as she came home clear within the time on Carismo 22 to remain on her dressage score of 36 penalties.

Going out in third place, French team rider Victor Levecque also had a problem at the Red Mills fence but, following a stop at the first element, he went on to compete with RNH MC Ustinov although dropping down to 35th place.

Berry, who had been lying fourth after dressage, was second last out on the track and, following the withdrawal of Catsky, she was under pressure to get home. This she did with the addition of just 2.80 time penalties to move into second (41.20). Clear within the time, Britain’s Alex Kennedy moved up from sixth to third (41.30) with the Irish Sport Horse gelding Lissangle Cavaletto B.

The cross-country phase caused little change in the European Eventing junior championships with Germany remaining in first place on 95.20 penalties followed by Britain whose team members all remained on their dressage scores (102.70). France retains third place in spite of the addition of five penalties to 136 while Ireland has moved up two places to fourth (140.80).

All but one of the top 10 riders on the individual leaderboard went clear inside the time, Britain’s Isabelle Upton maintaining her hold on the gold medal position with Eros DHI (23.90), ahead of the German pair of Gesa Staas on St Stacy (29.80) and Emma Brüssau with Donnerstag 20 (30.50). Kildare’s Alex Power continues to be the best-placed Irish rider and moved up a place to ninth following his excellent clear with Lakantus (41).