Exceptional women’s player will never get the credit accorded to, say, Roger Federer 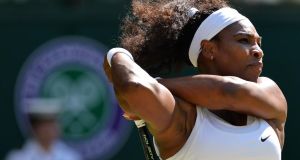 Serena Williams: has she been properly recognised for her amazing tally of 23 Grand Slam wins? Photograph: Glyn Kirk/AFP/Getty Images

You would be forgiven for getting excited about Roger Federer claiming his 19th Grand Slam at Wimbledon last weekend. Many people have responded saying he’s the greatest of all time and we will never see one like Roger Federer again.

You can’t dismiss what Federer has done for tennis. A man who was struggling in the last few years, plagued with injuries and giving his die-hard fans heart attacks as we all wondered would Federer ever be the same again.

Truth be told, he is not the same. In fact, at 35, you could argue this is the best Roger Federer we have seen in years, maybe ever.

When someone mentions a sport, such as tennis, it’s automatically assumed that the sport in question is being played by men

Fitter, stronger and more diverse in his attack and defence, Federer has managed what few in sports are able to do: reinvent, get stronger, be better and dismiss the effects of Father Time.

As Roger was celebrating his impressive eighth Wimbledon title at the young age of 35, Andy Murray sat on the sidelines and created headlines of his own.

Usually known for his incredibly boring demeanour, Murray tongue-in-cheek told a reporter that Sam Querrey was not the first American to reach a Grand Slam final since 2009.

Outrage soon occurred, with everyone stating it was obvious the reporter meant male tennis players and that Murray almost craved the attention that was now placed on the legend that is Federer.

The reporter would be forgiven for making a mistake. In a study done by Cambridge last year, overt gender marking is much more common for women’s participation in sport, both in terms of the sport itself (ladies’ singles) and the athletes participating (woman golfer). In other words, when someone mentions a sport, such as tennis, it’s automatically assumed that the sport in question is being played by men.

Federer is a legend and unquestionably slots in nicely among, not just great tennis players, but, great sports people overall. However, as a casual tennis fan, it would appear that he didn’t have much competition at Wimbledon this year.

Fans would say that he’s too good, you can’t compete with Federer. But, these same fans are quick to say some of Serena William’s titles are almost hollow. She steamrolled through opponents; she just played bums. But, is she, like Roger, just that good that nobody can compete with her?

One could argue that there’s the big four in men’s tennis and that is correct. Is there an equivalent in the women’s game?

Serena had Venus once upon a time. She also had Maria Sharapova, which, in fairness, became a good rivalry until Sharapova got banned for doping.

But, look at who Federer has had to face. Rafael Nadal has been Federer’s rival for some time, and Novak Djokovic has dethroned Federer many times . But, where were these guys at Wimbledon?

Muller convincingly beat Nadal, Djokovic was injured, and Murray was too busy fighting for women’s rights and desperately trying to battle through a dodgy hip. So, did Federer, like Serena, beat bums to claim his title? Is this eighth Wimbledon title as hollow as all 23 of William’s Grand Slams? Or, are we keen on using gender marking to avoid outrage from feminists?

Sure, Serena is good to a casual fan, but that’s women’s tennis, where there’s nobody around to challenge her. But, that Federer guy, he’s great at tennis full stop.

Is this another use of double standards or is comparing Federer to Williams like comparing apples and oranges? Serena, after all, only plays three sets, while Roger may have to play five sets in a slug fest.

Looking back through Federer’s Wimbledon campaign, he never played a full five sets, always sweeping his opponents to the side with that Federer forehand.

Tennis will always lay down a marker for gender standards, but, right now, it’s still struggling to make outside fans relish in appreciating both men and women. The denial of letting women play five sets on the basis that it’s physically impossible – their words, not mine – will forever be huge grounds for people’s grumbling.

As many tennis fans maintain, three-set matches are just not exciting, there’s no room for a comeback, whereas in a five-setter anything can happen, hence why the vast majority of the greatest games so far are male-based since comebacks were possible

As for Serena, while many acknowledge she is the queen of women’s tennis, that’s all she’ll be the queen of for now. Federer will earn all the plaudits for serving up a master class at Wimbledon.

In Serena’s, it’s time she gets some competition. Maybe follow McEnroe’s advice and play the 200th-ranked male tennis player. Or better yet, maybe beat McEnroe. I heard he was really good before he started using that mouth of his. I’m sure nothing would satisfy people more to hear McEnroe utter his famous line ‘you cannot be serious man’ as he gets pummelled by Serena.