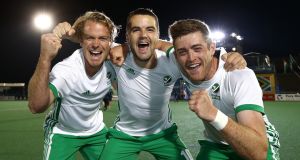 It formalised another major milestone for the green machine as they beat the Blacksticks for the first time, a lucky 13th meeting between the sides.

Ireland’s ticket to India 2018 was pretty much assured with Friday’s success against France. But this victory meant there was no waiting game like in the Olympic qualifying process two years ago, allowing Craig Fulton and his side to savour the moment without any doubts.

“It was a win built on character and defence,” he said of the performance. “We wanted to come away with qualification and that’s really pleasing from tonight, it was a great squad effort.”

Ireland started well with Shane O’Donoghue drawing a top block from Richard Joyce early on before having to endure sustained Kiwi pressure. Hugo Inglis rattled David Harte’s near post with an absolute rocket in the first half while Hayden Phillips put a gilt-edged chance wide after the big break.

By that stage, their numbers had been trimmed further with Eugene Magee going off with an ankle injury, joining John McKee – a broken collarbone victim – on the sidelines.

Harte produced a double save as Ireland threw bodies on the line at regular intervals to protect their clean sheet before nabbing their winner with 11 minutes to go.

Chris Cargo’s cross was booted away by goalkeeper Devon Manchester but only as far as Sothern and the poacher supreme flicked in his third goal of the tournament.

From there, they showed the battling defensive qualities that served them so well against France to get them over the line and into the World Cup.

“Over the moon,” Jonathan Bell added. “The shift the guys put in was absolutely fantastic. It wasn’t the prettiest hockey but that doesn’t really matter because we are through to the World Cup.

“We were bitterly disappointed to lose the quarter-final to Spain where we felt we had a lot of the game but we came back really strong [against France], putting in back-to-back performances. This victory is testament to the character and belief in the squad.”