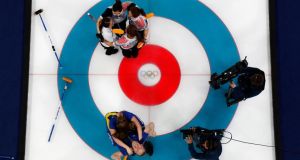 Agnes Knochenhauer of Sweden is embraced by her team-mates as they celebrate in front of South Korea’s players after winning the women’s curling gold medal match. Photograph: Cathal McNaughton/Reuters

The fans at Gangneung Curling Arena stood and waved South Korean flags and handmade signs in a salute to their women’s curling team and their unexpectedly strong showing at the Games.

The final between South Korea and Sweden already was something like a “Miracle on Ice” moment, a sporting event that felt like a national pride rally for South Koreans.

By the time they outlasted Japan in an emotionally draining semi-final, the South Korean curlers, called the “Garlic Girls” in the local news media for their pluck and origins in a garlic-growing region, had inspired scores of online tributes from compatriots mimicking them by sweeping the floor with broomsticks in front of their televisions.

But they would not get their miracle on ice.

The South Koreans succumbed to a more experienced, more skilled Swedish team, 8-3, in a match that was conceded before the 10th and final end.

Sweden were making its fourth consecutive appearance in the final. They had won in 2006 and 2010 and earned the silver, behind Canada, in the 2014 Sochi Games. This year’s team included one player, Agnes Knochenhauer, from the Sochi squad, and she said the pressure that she and her team-mates faced in this tournament came from within. “We really wanted to do this,” she said, “and we knew we could if all of us played really well.”

The South Koreans faced external pressure to put on a good show in front of their home crowd. They fielded a completely different squad from 2014, when the country made its Olympic debut in the event. Four of the five team members attended high school in Uiseong, roughly 80 miles south of Pyeongchang. The city is the nation’s curling centre but also its garlic capital.

Although the “Garlic Girls” nickname follows them everywhere, the homemade signs ringing the arena gave voice to the team members’ preferred moniker: Team Kim, a reference to the fact that the four starters, the alternate and their coach share that surname (two of the athletes, Kim Kyeong-Ae and Kim Yeong-Mi, are sisters).

The South Korean curlers came across as having a closeness and a camaraderie that was enviable. But in their news conference after the loss, there were hints of the hardships they have endured on their way to becoming Olympic darlings. The coach, Kim Min-jung, became emotional, stopping at one point to compose herself, while speaking of the “issues” they had to overcome.

“It was very hard for me to lead the team properly because the Olympic Games could be the only chance for the team members,” she said through an interpreter. “So we had to resolve the issues within ourselves.”

Asked to elaborate, she said through an interpreter that the country really only got behind curling in 2014, and because it remains less popular than other sports, it has been difficult to obtain the resources to properly develop athletes. As the words rushed out of Kim Min-jung, the curlers sat next to her on the podium, stone-faced.

The news conference, which began with the moderator announcing that the curlers would not answer “political or sensitive questions,” contained a few lighthearted moments. Kim Eun-jung, 27, the team skip, essentially a captain on the ice, explained that “Eun” means silver in Korean. So maybe, she said with a laugh, she should change her name to “Geum-Jung because geum means gold.”

But then her tone changed. She said the team went through “a lot in order to be successful.”

The curlers’ sombre expressions throughout most of the news conference gave the impression the silver medals hung heavy around their necks. Their expressions brightened when they left the interview tent and were greeted by men in police bibs and volunteers who clapped and took photographs.

“It was our first time ever to really curl in front of a big audience,” said Kim Seon-Yeong. “All I can say is ‘Thank you so much.’” – New York Times

No final round heroics for Rory McIlroy at US PGA 22:18
Ronnie O’Sullivan beats Ding to reach Crucible last eight 21:19
Solskjær praises Martial for building himself into ‘powerhouse’ centre forward 21:14
Tyrone’s McShane ruled out for rest of the season 20:56
Shamrock Rovers battle back at the Brandywell to go six clear 20:42
Here is your handy guide to sport on television this week