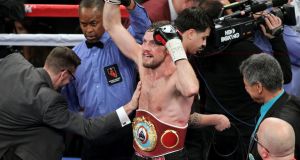 Former world middleweight champion Andy Lee has announced his retirement from professional boxing at the age of 33, citing family reasons having recently become a father.

Born in London, Lee moved to Limerick as a teenager and went on to represent Ireland at amateur level, winning silver at middleweight at the 2002 World Junior Championships in Cuba, where he was beaten in the final by Cuban fighter Noelvis Diaz.

In 2004 he won bronze in the European Championships in Croatia to qualify for that summer’s Olympic Games in Athens. Before travelling to Greece, Lee also won silver at the EU Championships in Madrid but he bowed out in the second round of the Olympic boxing tournament when he lost on a countback to a Nigerian fighter.

Lee turned professional under legendary trainer Emanuel Steward at the Kronk Gym in Detroit and won his first fight in March, 2006.

Although he claimed some minor world title belts in 2011, Lee’s first major title shot came against WBC middleweight champion Julio Cesar Chavez in June 2012, where he was stopped in the seventh round in El Paso, Texas.

Lee became WBO world middleweight champion in December 2014 when he stopped Russia’s Matyev Koroborov in the sixth round of a sold out show in Las Vegas.

Lee would lose the belt in his first defence with defeat to Billy Joe Saunders in September 2015 at the Manchester Arena and fought for the final time in March 18th of last year when he secured the 35th win of a 39-fight pro career with a unanimous decision over America’s KeAndrae Leatherwood at Madison Square Garden in New York.