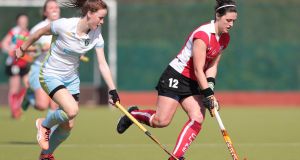 Emma Russell was on target for UCD in her sides’s Irish Cup quarter-final victory over Lurgan. Photograph: Paul Walsh/Inpho

UCD and Loreto battled their way in to the semi-finals of the Irish Senior Cup on Saturday, joining Pegasus in the last four of the competition, while Belfast Harlequins finally got to play their second round fixture against Pembroke Wanderers, a 2-1 victory putting them through to play Cork Harlequins in the quarter-finals.

Cup holders UCD travelled to Lurgan without four of their regulars, exam commitments ruling out Deirdre Duke, Sorcha Clarke and Katherine Egan while Leah McGuire was missing through injury. They had to dig deep too after Emma Lindsay put the Ulster side a goal up when she was the first to the rebound after Clodagh Cassin had saved a penalty corner strike.

Jane O’Brien had the students level before the break but it wasn’t until the last 10 minutes of the game that they found the goals to finish off the tie, Emma Russell scoring after some fine work by Katie Mullan before Sarah Robinson made it 3-1.

Railway Union and Loreto’s Hockey League meeting last month ended in a scoreless draw and there wasn’t much between them again at Park Avenue in their cup tie, Siofra O’Brien’s 10th minute goal deciding the game and putting Loreto through to the semi-finals.

Pembroke would have been hopeful of joining them in the last four when they went 1-0 up against Belfast Harlequins through Hayley O’Donnell, but Jenna Watt and Abi Edwards turned around a tie that was initially due to be played in November, the weather forcing its postponement until Saturday.