US Treasury linked interim president to the Eurasian criminal entity, the Thieves-in-Law 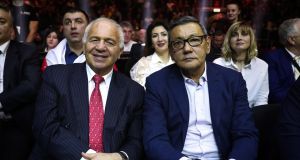 Franco Falcinelli, former vice president of the AIBA with acting AIBA president Gafur Rakhimov who was “installed” during a lunch break at the AIBA Congress in Dubai last month. Photograph: Valery Sharifulin/TASS/Getty

We were somewhere on the back streets of Athens, trying to find the Peristeri Boxing Hall, following the shamrocks and leprechauns and guided by a few locals sipping liquors on small wrought iron balconies.

It was on a hot Saturday evening, August 2004 – the first and only time I got to see Andy Lee fighting in the flesh. After a couple of Olympic cycles punching below their weight, Lee was the Irish boxing team in Athens, a heavy burden on any 20-year-old’s shoulders.

Even before he entered for his middleweight bout the Irish contingent were in full cheer, and Lee didn’t disappointment, deftly outscoring his Mexican opponent Alfredo Lopez, 38-23.

“I put a few together alright, twos and threes, you know yourself,” Lee politely told us afterwards. “But I was never worried, as long as I won the fight.”

Beside him stood Billy Walsh, his coach, quietly predicting more: “He’s very confident, an extremely talented young lad, well ahead of his time. I mean that was a huge occasion for him, a lot to ask. I know from being here myself at 25 how you can make a bags of it.”

His next bout against Hassan Ndam Njikam of the Cameroon clashed with the 100 metres final, and it was later that night when news came through that Lee had lost on countback; emotionally and physically he’d given his all in a contest he cared dearly about.

The then Irish Sports Council – with Walsh’s backing – offered Lee everything he wanted to remain amateur until Beijing 2008, but he already saw beyond that, perhaps sensing something about the amateur ring and the greater risks which came with it. In December 2005 he signed with Emanuel Steward in Detroit and the rest is Irish boxing history.

This all came back listening to Lee talk about his retirement with Joe Molloy on Off The Ball this week, especially as he still rates representing Ireland at those Olympics as one of the highlights of his career. As it should be.

Without giving a blow-by-blow account of what happened next, Irish boxing soon became the envy of the amateur ranks – Walsh being the driving force behind it. Three medals won in Beijing, four more in London 2012, increased to 16 our number of Olympic boxing medals, one more than all other sports combined.

Rio should have been further icing on that cake, only for things to turn properly amateur – in more ways than one.

That still comical situation of not affording Walsh a basic pension as part of his IABA contract meant he decamped to US Boxing, before much of the Rio boxing tournament became an actual joke – highlighted by that thieving decision on Michael Conlan after his bantamweight quarter-final against the Russian Vladimir Nikitin.

Things have since gone from bad to worse – and there’s now the real danger of boxing being pulled by the Tokyo Olympics, unless the AIBA, the world governing body, get their house in order.

The International Olympic Committee (IOC) suspended AIBA funding in December, and have given them until April 30th to report back with the promise of proper reform on such basic issues as governance, finance, referring and anti-doping. Or else . . .

That might sound a little cheeky coming from the IOC but the bigger worry is that last month the AIBA “installed” Gafur Rakhimov from Uzbekistan as their interim president, the election for the permanent presidency not due until the AIBA Congress in Moscow in November.

Rakhimov may well be “installed” at that stage too, but in the meantime is tasked with overseeing these now critical reforms: the AIBA did expel several judges after the Rio fiasco, only to later reinstall some of them; their anti-doping is still largely non-existent and there’s still no formal project to improve refereeing. The IOC are also insisting they cut two men’s weight divisions for Tokyo to make way for two more women’s, although the AIBA want none of that.

“We are extremely worried about the governance of the AIBA,” said IOC president Thomas Bach, during an opening session of the Pyeonchang Winter Olympics – and so he should be.

Rakhimov may not be known in sporting circles, but he is to Interpol, and the US Treasury, for being a mafia boss with strong links to organised crime in Uzbekistan, even if he hasn’t yet been prosecuted for anything.

The AIBA had originally chosen the Italian Franco Falcinelli as their new president, to replace C K Wu – eventually forced out of office after 11 years following several allegations of financial mismanagement (including a “missing” €8.5 million loan). Falcinelli decided to step down, Rakhimov was then “installed” during a lunch break at the AIBA Congress in Dubai last month. There was no vote.

At the same time the US Treasury named Rakhimov among 10 individuals with alleged links to the Eurasian criminal entity, the Thieves-in-Law, born in the old Soviet Union prisons and believed to operate in an underworld network that has spread beyond Russia to the world’s leading financial centres.

Rakhimov was also on Interpol’s most wanted list, before being removed last September, though his alleged links with the mafia and the heroin trade saw him refused entry to Australia for the Sydney Olympics back in 2000. It didn’t stop him serving as AIBA vice-president for the last 15 years, and now from leading amateur boxing towards Tokyo 2020.

Saturday night’s Elite Finals at the National Stadium in Dublin should be the beginning of the journey for the next generation of Irish boxers towards representing Ireland at the Olympics, still so cherished by Lee, if not so much by Conlan.

Instead the AIBA has become not just a shambles but a sham: maybe the IOC would be doing the sweet science a favour by keeping them out of 2020, maybe that way finally forcing the revolutionary changes the sport now needs.

1 Gordon D’Arcy: If Farrell can tap into our self-worth, we’re all on a winner
2 Winds of change as Ireland name a refreshed team, picked on form
3 Who is Caelan Doris? Meet Ireland’s newest rugby star
4 Nike Vaporflys won’t be banned but regulations will tighten
5 Saracens docked 70 points and interim CEO resigns
Real news has value SUBSCRIBE