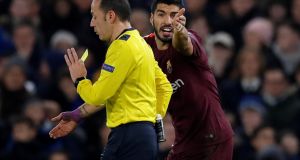 If for some unknown fake banter reason, you ever decide to fulfil life ambitions by participating in a Match of the Day/Sunday Game bingo, there’s one thing you can always guarantee to tick off – analysing referee decisions.

Week in and week out, newspaper columns, online forums and social media are filled to the brim with various analysis on what a referee did and did not do. And it’s guaranteed the ‘did nots’ are always scrutinised more than what the referee actually did.

Instead of insightful analysis and match tactics, pundits, fans and ex-players alike all find an out by dedicating TV time and page space to what went wrong for a referee.

Sure, some talking points are necessary, but in all honesty, it is time sports fans accept that referees are not getting worse, scrutiny is just getting bigger and bigger every single day. Those that are wrong have little use, it’s over and is done while one former footballer cannot shout over another former footballer about something that is absolute. Twenty-four-hour news coverage uses disagreement as its fuel. The simple dispute quickly becomes controversy; controversy becomes outrage.

The referee in any sport has conventionally been viewed as the pantomime villain, the bad guy. Match-going supporters boo, catcall and sometimes abuse the ‘bastard in black’, but this was usually confined to the minutes within the ground, followed by the debates in the streets, pubs and kitchens alike.

Somewhere along the way things changed. The refereeing witch hunt has become Saturday and Sunday night entertainment show, every decision replayed and dissected in the search for precious incompetence and answers for the aggrieved teams.

This may be sold by broadcasters as a hunt for truth and justice rather than a hunt for the witch, but the result is the same. Controversy becomes a self-fulfilling prophecy. Tell a sports fan often enough that they have cause to be outraged, and you’ll soon find you cannot turn off that outrage. The culture of blame that is generated as a result becomes a culture of hate.

While I do agree with continuous training and monitoring of referees, I think the example of the German Bundesliga could be looked at. After each weekend a panel reviews and publishes each referee’s key decision, whether it was given or not, and grades them as right, wrong or uncertain, while German officials may also talk to the press after games to explain crucial decisions.

Likewise, in the NFL, where the NFL director of officiating takes you through each game and each decision and whether it’s right or wrong. Even if you do feel aggrieved, you can feel safe in the knowledge that someone else agrees with you.

The continuous example in GAA of officiating with hunts has to be the black card. Yes, we all know it’s as clear as muddy water, and yes everyone has a different interpretation of the word cynical.

In fact, my favourite ever fan moment was discovering the cute hoors behind in Kerry don’t have black cards. But, that’s not precisely the referees fault. The lawmakers and rulebook writers have written the rules in such an ambiguous way, top lawyers and solicitors would struggle to decipher the real meaning.

Even look at the new scrutiny of what is the definition of a melee versus what is a mass brawl. Sure, it’s essential to prevent ugly scenes in a game, but it’s not 100 per cent down to a referee. They can only decide in the heat of the moment, with fans on their backs, players yelling at them and god knows what other pressures. Even reading that a roll of sweat dripped off my forehead. It’s up to reviewers and heads of the GAA to decipher if the punishment fits the crime.

Maybe it’s time we look at allowing the referee to explain his decision directly after the game to the media, instead of steering them away like some scared little children who might say the wrong thing. Or maybe we can take the example of RTÉ’s All-Ireland final documentary where the referee was mic’d up so we could hear the decisions being hashed out in that moment.

Or maybe it’s time to throw out the current rulebook and, instead of using ambiguous terms, have a definite step by step process. Sure, you mightn’t cover all angles, but with proper officiating reviews system, you could probably have 99 per cent of situations covered.

But one thing is for sure. It’s time to stop over-scrutinising the “bastard in black”. The short-term mentality in football and sports, in general, has created extremism which leads fans to act in a way they probably normally wouldn’t.

Having created this refereeing crisis, it is down to the media to quash it. Analysis of matches by broadcasters has – for the most part – never been of a higher quality, but fuelling controversy helps nobody. Cameras are being placed in every position for fans to get the ultimate experience, meaning review panels no longer have an excuse.

As Pierluigi Collina, probably soccer’s most famous referee, wrote in his book “The referee’s job is one of service.”

1 Georgia and Fiji in line to join Six Nations sides in eight-team tournament
2 All in the Game: Jack fact-cheques money story
3 Malachy Clerkin: Sleep well Jack, you made us all happy
4 Keith Duggan: Bubba Wallace tweet shows just how troubled Donald Trump’s mind is
5 Ken Early: Another Mourinho masterclass in going through the motions
Real news has value SUBSCRIBE