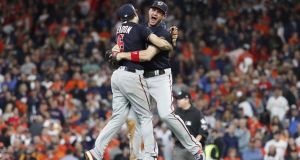 In the ninth inning of the Washington Nationals’ Game 7 win over the Houston Astros on Wednesday night, Fox colour commentator John Smoltz quipped that the 2019 World Series was “the series of the unexpected”.

For the first time in any major North American sport, the visiting team won all seven games of a best-of-seven playoff series. Wednesday’s series finale marked the Nationals’ record fifth comeback win in a potential elimination game in the post-season. It was thrilling stuff on paper, yet Major League Baseball has battled a host of bad press and unwanted storylines throughout the series.

The first five games were mostly dreary, lopsided affairs lacking the tense and unpredictable moments that draw casual sports fans toward baseball, a sport failing to keep pace with the immense popularity of the NFL and NBA. Instead of the game action, the storylines permeating the World Series media cycle involved insensitivity to domestic violence, the appropriateness of booing the president of the United States and sluggish pace of play that hindered television ratings.

The Nationals may not have saved baseball from the distractions that revealed the unseemly truths facing the sport, but their victory over one of the best teams in baseball history offered a respite from a glut of unwanted press that dominated the playoffs.

For the first three games, the public focused on a fiasco involving the Astros and Sports Illustrated reporter Stephanie Apstein. Apstein reported that Houston assistant general manager Brandon Taubman shouted “I’m so f**king glad we got Osuna!” at three female reporters, one of whom was wearing a purple domestic violence awareness bracelet. That was in reference to pitcher Roberto Osuna, a player who served a 75-game suspension while a member of the Toronto Blue Jays after violating the league policy for domestic assault. (Osuna allegedly assaulted the mother of his three-year-old child, but the charges were dropped after she returned to Mexico and declined to testify.)

After declining to respond to Apstein, the Astros publicly stated that the story was fabricated. Multiple reporters confirmed Apstein’s account of the events and the team issued subsequent statements, none of which apologised to Apstein and instead focused on the organisation’s dedication to domestic violence awareness.

Those offerings didn’t quiet the public’s distaste for a malicious attempt to smear a reporter, and the team eventually apologised and retracted the original statement after a tone-deaf press conference from general manager Jeff Luhnow and a letter from owner Jim Crane.

The Nationals’ improbable victory may have relieved commissioner Rob Manfred, who handed the championship trophy to maybe the most likable team of the post-season instead of the one whose owner and general manager caused the titanic public relations crisis that distracted from the sport’s marquee event.

Between the lines, the Astros are a nearly perfect baseball team. They became only the sixth team in major league history to finish with more than 100 wins for a third consecutive seasons. They also feature some of the brightest talents in the sport.

Second baseman Jose Altuve became just the seventh player in history to hit a walk-off home run to clinch a pennant, starting pitcher Gerrit Cole compiled one of the most brilliant runs of any starting pitchers in baseball’s annals, and the team dominated virtually every offensive category throughout the season. To witness Houston play baseball is to watch an evolution in power pitching, deft game management and execution.

It wasn’t until the post-season that the team’s cutting-edge and calculating front office proved the dangers of an increasingly pervasive mentality across baseball that winning solves everything. The Taubman scandal may have shocked the general public, but it confirmed the suspicions of Houston’s competitors: this was not an innovative underdog that built an empire; instead, the Astros were a ruthless and arrogant front office whose addiction to winning triggered an avoidable and embarrassing scandal.

The controversy of the Taubman affair quietened after Game 3, but even the negative press didn’t boost lagging ratings. Through five games, the series was on track to be the lowest-rated in history (11.59 million average viewers compared to the 12.34 million in 2012, the current low).

Viewership increased in each game and peaked at 15.31 million in Game 6 and likely increased for Wednesday night’s Game 7. The gains were encouraging signs, but Sunday night’s NFL game between the Green Bay Packers and Kansas City Chiefs still dwarfed Game 5, the highest viewed game at that point in the series, by roughly six million viewers according to Nielsen.

Game 5 also featured Donald Trump being aggressively booed by the home crowd in DC, launching a discussion about public civility instead of Houston’s comeback from 2-0 down to lead the series 3-2.

Surprisingly, Trump did not tweet about the poor welcome in the nation’s capital, but the moment spilled from sports channels into the cable news airwaves. Again, the action on the field was forgotten by a sideshow. Perhaps it was the running time of every game – six of the seven ran over three-and-a-half hours after starting at 8.08pm on the east coast – that invited the distraction.

To echo Smoltz, maybe it was the unlikely path of the final two games that helped save the series. At the very least, it may have distracted from the drama that surrounded it. An umpiring controversy in Game 6 thankfully didn’t swing the outcome (though it did lead to the rare ejection of a manager, Washington’s Dave Martinez), but showed that even baseball’s highly structured and exacting rule book is subject to the replay review and technical interpretations that infuriate viewers in football, soccer and basketball.

The gaudy home run celebrations of Houston’s Alex Bregman and Washington’s Juan Soto invited mindless, overwrought conversations about baseball’s unwritten rules of professionalism while the lead swings in both Games 6 and 7 provided the kind of entertainment that MLB hoped for from the outset.

By the series’ conclusion, fans will likely remember the vigour of the 21-year-old Soto, the unflappable pitching of World Series MVP Stephen Strasburg and the joy of a Nationals team that couldn’t win a playoff series until this year despite four post-season appearances from 2012 through 2018.

With a wealth of marketable young talent – Soto, Bregman and Carlos Correa are all 25 or younger – and a game increasingly driven by power and athleticism, baseball still remains behind football and basketball in its American and worldwide appeal. Some of the drama that surrounded the series was avoidable (Taubman), some of it will require structural fixes (pace of play).

The series ended in a way for so many to enjoy, but the issues harming the sport’s popularity were evident. Games 6 and 7 were the kinds of viewing experiences that may turn casual fans into devoted ones, but they may think twice if they stomached the first five. – Guardian