Hockey Ireland to decide on possible action over penalty in Canada 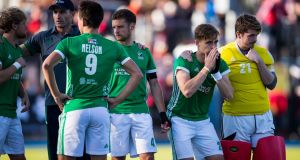 Hockey Ireland are waiting for the return home of performance director Adam Grainger from Canada before deciding on how to proceed with the penalty awarded against Ireland in the dying seconds of their playoff match against Canada which cost them a place in next year’s Tokyo Olympics.

Ireland, believing they had won the series with a better aggregate over the two matches, began celebrating before the Canadian players asked for a video referral. The umpire had signalled for an Irish hit-out, which would have given Ireland the win. Neither of the two pitch umpires had indicated that any foul had been committed.

When the referral to the video umpire Diego Barbas came back his view was a penalty stroke to Canada, judging that Lee Cole had fouled a Canadian forward driving at the Irish goal. Replays show Cole shadowed the ball with forward James Wallace standing on his stick and slipping. Even then Wallace tried to keep the ball in play. For the referral the Canadian players were complaining of a body tackle.

A brief statement from the international governing body, the FIH, declined to comment on the issue. “Umpires’ decisions are final and, as a general principle, FIH does not comment publicly on individual umpiring decisions,” said the FIH.

Irish rugby acted when Connacht centre Bundee Aki was sent off for a high tackle on UJ Seuteni in Ireland’s 47-5 win over Samoa that booked Joe Schmidt’s men a World Cup quarter-final. As a result of the card Ireland expected Aki to face a disciplinary hearing within 36 hours, with a suspension probably ending his World Cup.

So the Irish Rugby Football Union flew out William Fry partner Derek Hegarty to act for the union in any eventual hearing. It stood up for its player despite only a slim chance of success.

The sport of hockey in Ireland is festooned with solicitors, barristers and judges. It would not be costly to pore over regulations to see if they were strictly adhered to.

There are already posts on social media questioning how closely the stated procedures were followed.

And what is umpiring? Following rules. Do umpires have to give post-match reports. Does Mr Barbas have to explain his reading of the incident or explain where the body tackle came in? It also appeared from the sound of it that Barbas awarded the penalty. If so, is he allowed to do that?

6.1 The final decision, including any matter of interpretation, remains with the match umpires and not the video umpire.

6.2 All other decisions remain with the match umpires.

This is how the exchange between the pitch umpire and referral umpire unfolded.

“They’re asking for a body tackle in the D before the whistle has gone, have look please if there is a tackle and when the whistle was blown,” asked the German umpire.

“Yes that’s Ireland’s infraction of the 29 of Ireland so that’s a penalty am . . . a penalty stroke,” said the referral umpire. It is difficult to see where rule 6.1 comes into that conversation, although maybe there is an explanation.

There was a one-line statement from Hockey Ireland on Monday afternoon.

“There was no appeal last night as teams cannot appeal umpire decisions,” it said.

Does that mean they let it slide and the opportunity to question anything about the process has been lost. Did Irish captain Jonny Bell, who said the referral umpire “should hang his head in shame”, officially question the decision afterwards.

Bundee Aki got the best. With the Irish women up next weekend, Hockey Ireland will want to show that it too will go the full mile to support its athletes.