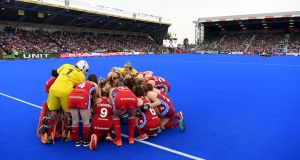 The Britain team form a huddle on the world’s first fully portable international standard hockey pitch during the match with New Zealand at Twickenham Stoop in June. photograph: Alex Davidson/Getty

In June of this year, the world’s first fully portable international standard hockey pitch was installed at The Twickenham Stoop ahead of the Pro League international matches between Britain and New Zealand. The pitch was 100m long by 60m wide plus run-off space.

Calling it the biggest breakthrough in the sport since the 1976 Olympic Games in Montreal, it was laid down over the grass pitch in less than a week, causing no damage to the Harlequins rugby surface underneath.

The technology that allows the pitches to be laid over almost any existing flat surface is seen as a game changer for the non-major sports like hockey, which this week will play two Olympic qualifying matches at Leinster Rugby’s Energia Park.

The pop-up hockey pitch, which meets Olympic spec standards, is laid on top of the existing synthetic rugby pitch. Over the weekend that process began in Donnybrook.

While both the rugby and hockey pitches are synthetic, because of the different surfaces required by each sport, the hockey pitch surface is unsuitable for rugby and vice versa.

The idea is simple. While minority sports such as hockey are unable to fill large stadia like the one in Donnybrook for their club or international matches, they can do it for spectacles such as the Irish women’s double-header against Canada this weekend in a winner-takes-all format.

The successful team over the two matches earns direct entry into next summer’s Olympics in Tokyo. An Irish women’s hockey team has never before qualified for an Olympic Games.

“It is ambitious,” says Hockey Ireland CEO Jerome Pels. “But it’s a unique set of circumstances. We all know how many people came to welcome the team back after the World Cup. We never expected 10,000 people so we believe it’s a unique moment in time where the [Irish] girls are this high level. The Olympic qualifier, that format is pretty unique as well. That unique set of circumstances basically justified the plan.”

The pitch surface used at Twickenham Stoop is cutting edge and developed by a company called Polytan. After the Stoop it was disassembled to be installed at Bisham Abbey for the men’s and women’s GB teams to prepare for Tokyo. The Bisham Abbey pitch will then move to Lilleshall for young players in the country’s national age groups.

Big Stadium Hockey, the company behind rolling out the pitch, is using the same system they used at Harlequins and for the Dublin installation the cost will come in at a little under €250,000.

For that Hockey Ireland gets its pitch in a pre-existing stadium that holds over 6,000 fans and Leinster Rugby gets additional rental income. While there is considerable savings in not having construction costs, there are a number of price points, the rental cost from Leinster Rugby and the building, taking down and leasing of the pitch.

Prior to this innovation high-stakes international matches where played in UCD and Banbridge. However, neither clubs had big enough infrastructure to cater for the larger crowds, so temporary seating had to be constructed around the pitch.

“They have refined their plans so that it can be done quicker [than the Stoop]. What is also important is that they can put the price down. Because England Hockey is going to repeat this next year it means we don’t have to buy the carpet, buy the equipment. We have a kind of lease agreement.

“From a financial point of view the plan is that it will break even. It is not something to make a huge profit. A lot of the revenue that we get from the ticket sales will go into investing that into installing the carpet. Wherever we would have gone in Ireland if we want to bring in the public then we have to bring in the infrastructure.

“This was weighing up the pros and cons, either going to an existing pitch and put a lot of stands in or go to where the stands are already there and put the pitch in.”

Now for twice or three times the lower cost of Banbridge, the sport needs to fill Donnybrook and is hoping that will come on the back of public interest in the successful run to the World Cup final last year in London’s Olympic Park.

“Absolutely yeah,” says Pels on having to fill the stadium for both Saturday and Sunday matches, which are also being televised by RTÉ. “Everybody tells us that will happen and that there is a lot of interest and the phone hasn’t stopped ringing. It is an important part of making the plan work.”

The uptake of tickets has been encouraging. The only tickets available to buy now are €25 adult standing positions on both days. The €10 junior standing terrace tickets are sold out. The €75 weekend pass for the covered stand are also sold out as are the €40 stand seats for the first day and the €35 stand seats for the second day.

In keeping with the concept of a family day out with the match as the centrepiece, there will be a kid zone, a fan zone and hospitality where a table of 10 is going for €1,500. That includes seats in the covered stand, a two-course meal plus tea/coffee in the AerCap Leinster Hospitality Pavilion, 15-minute MC and guest speaker during the pre-match activities, two bottles of wine per table and a complimentary match day programme as well as returning to the Leinster Hospitality Pavilion to conduct post-match analysis.

“We got a lot of good feedback from people who watched [World Cup] hockey on television and they were all saying we never followed the game but that it is a very good product,” says Pels. “One big question is what will be the format going forward. What will be the competitions that are worthwhile watching.

“That’s kind of out of our hands. But if it works yeah, who knows we’ll be doing it again. We’ll probably need to get this out of the way first. It’s a big learning moment as well. England Hockey is a much bigger organisation and they have a much bigger database. Having a smaller nation doing something like this is will show other NGBs that this is maybe and opportunity and this is something that maybe can be done.”

If hockey makes the numbers it hopes to, it would put the women’s team on a par with the Irish women’s rugby team that play their Six Nations home matches in Donnybrook. This year the team drew 4,637 spectators for their match against England.