Ex-NFL star Hernandez had ‘severe’ CTE according to lawyer

‘It was the most severe case they had ever seen, it was an advanced stage’ 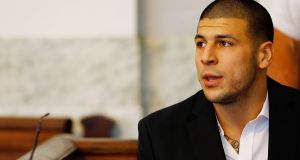 The daughter of former New England Patriots player Aaron Hernandez, who killed himself in April after being acquitted in his second murder trial, sued the National Football League and the team on Thursday after tests revealed her father had a “severe case” of the brain disease chronic traumatic encephalopathy.

Relatives of the 27-year-old former athlete had asked that his brain be tested for CTE after his body was found hanging in a Massachusetts prison in April where he was serving a life sentence for the 2013 murder of an acquaintance.

“It was the most severe case they had ever seen,” Baez told reporters in Boston. “It was an advanced stage.”

CTE is linked to the sort of repeated head traumas common in football that can lead to aggression and dementia.

Hernandez’s daughter, Avielle, on Thursday sued the Patriots and the National Football League in federal court in Boston, citing the CTE finding and seeking unspecified financial damages for the loss of her father.

Representatives of the NFL, the Patriots and Boston University did not immediately respond to requests for comment.

Boston University’s CTE centre in a statement on Thursday confirmed that its researchers found that Hernandez’s brain showed signs of stage 3 of the disease, with stage 4 being the most severe form.

Research released by the BU CTE centre this summer found signs of CTE in 99 per cent of former NFL players it studied. The disease can be diagnosed only by taking brain tissue from a dead subject. It has been found in athletes including Hall of Fame linebacker Junior Seau and Pro Bowl safety Dave Duerson, both of whom committed suicide.

Hernandez had a $41 million NFL contract when he was arrested at his home in June 2013 and charged with murder. Prosecution witnesses at his two trials painted a picture of a troubled man with a history of drug use and paranoid tendencies.

A judge earlier this year vacated that conviction, because Hernandez had not exhausted all his avenues of appeal by the time he died, a move allowed by a quirk in Massachusetts law. Prosecutors are appealing that decision.

He was found not guilty in April of separate charges of fatally shooting two men outside a Boston nightclub in 2012.