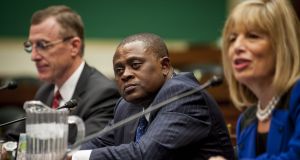 Dr Bennet Omalu (centre) was the lead author of the study into evidence of chronic traumatic encephalopathy (CTE) in a living patient. Photograph: Pete Marovich/Getty Images

Scientists claim they have confirmed evidence of chronic traumatic encephalopathy (CTE) in a living patient for the first time, a potential breakthrough in the research of the progressive degenerative brain disease that’s been linked to repeated blows to the head.

A peer-reviewed study published in the medical journal Neurosurgery found the presence of tau, a signature protein of CTE that forms around damaged neural cells, in 14 retired NFL players who underwent experimental brain scans. Doctors confirmed a diagnosis of CTE in one of the players, who is unnamed in the paper, after he died.

To date, doctors have only been able to make posthumous diagnoses of CTE, which has been associated with symptoms such as memory loss, depression and dementia.

Dr Bennet Omalu, the lead author of the study, told CNN the subject unnamed in the study was former NFL player Fred McNeill, a longtime Minnesota Vikings linebacker who died of ALS in 2015 aged 63.

The paper says the subject played football for 22 years, including 12 in the NFL, and began attending law school during his final NFL season, adding that he had only one reported concussion throughout his career, suffered while he was in college.

After graduating from law school, he practiced law at one firm before moving to another where he made partner, but was dismissed within four years for lack of performance. That pattern repeated at least twice more before he stopped practicing law and filed for bankruptcy.

Around the time he underwent the experimental brain scan at 59, he was exhibiting behaviors consistent with known CTE symptoms, including impaired motor skills that deteriorated until he could no longer feed himself.

It’s important to note the evidence, based on a single case, relies on a brain scan that took place 52 months before the subject’s death. Given the progressive nature of CTE, the span of time is significant. Also, researchers used a number of clinical signs to make the diagnosis, including symptoms of depression and motor skills damage.

Julian Bailes, a neurosurgeon at Evanston’s NorthShore University Health System who participated in the study, acknowledged that more research is required to corroborate the conclusion, but presented it as an important step toward developing a reliable diagnostic technique and possibly treatments.

“It’s only one case report, but that’s the way science begins,” Bailes told USA Today on Wednesday. “There’s more to understanding, but this is a nice demonstration of the correlation of a living scan and an autopsy of the brain.”

The study comes at a time when the link between CTE and participation in football is under scrutiny. A study published in July by scientists at Boston University and the Boston Veterans Affairs health system found CTE in 110 of 111 deceased NFL players’ brains that were donated to scientific research. (Researchers warned that study could not be used to assess how many people who play football develop CTE since the sample was comprised of brains donated by family members, most of whom said their loved ones had reported CTE symptoms during their lifetimes.)

A separate Boston University School of Medicine study in September found that children who start playing football before the age of 12 are twice as likely to develop emotional and cognitive difficulties compared with those who start later.

CTE has been discovered during autopsies for a number of former players, including Hall of Fame linebacker Junior Seau and Pro Bowl safety Dave Duerson, who both killed themselves. The NFL for the first time acknowledged a link between football and CTE in March 2016, nearly one year after a federal judge approved an estimated $1 billion settlement of thousands of concussion lawsuits clearing the way for payouts to more than 20,000 retired players. – Guardian service