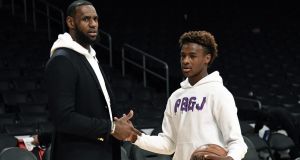 With just under 57 seconds remaining, and his side trailing by one, Sierra Canyon’s Bronny James blocked an inbounds pass on the halfway line, gathered the loose ball and started to slice towards the St Vincent-St Marys’ basket.

Escaping the cover, the 15-year-old went airborne, palming a soft lay-up against the glass and in for a lead that his team never relinquished. At every juncture of the play, his father LeBron, all 6ft 9in of him in a grey tracksuit, was bouncing animatedly on the sideline until one of the referees had to politely ask the bearded behemoth to step back from the court.

More than 400 media credentials were issued for this high school basketball game last Saturday, and, despite the fact ESPN were broadcasting it live on national television, 13,000 more paid in to the Nationwide Arena in Columbus to see LeBron’s alma mater take on his son’s Los Angeles prep school.

Many had probably come to rubberneck the elder James, now adding America’s most famous sports dad to all the other titles he’s garnered this past two decades. Some, however, were there to see what all the fuss was about his scion, a freshman who came off the bench to score 15 points and win MVP.

In his first year in high school, Bronny James has been famous most of his life and talked about as a prospect for nearly half of it. When he joined Instagram earlier this year he surpassed one million followers in a single day and now boasts more than three times that number, a very 21st century barometer of his celebrity at such a callow age. Although scouts are objective enough to point out he’s not near the best player in the country even in his age group, they also rave about how good he may yet be if he continues to improve and to grow – like his father did in his late teens. As always, such comparisons are unfair but inevitable.

“I still regret giving my son my name,” said James. “When I was younger, obviously, I didn’t have a dad. My whole thing was, whenever I have a kid, not only is he gonna be a junior but I’m gonna do everything this man didn’t do.”

With a mother who was 16 years old when she gave birth to him, LeBron grew up in real poverty, often sleeping on his friend’s couches or in the homes of his coaches. At 17, Sports Illustrated put him on its cover and called him “The Chosen One”, a ridiculous burden. His greatest achievement has been to live up to that breathless hype on and off the court. Having morphed into a sporting plutocrat and philanthropist with hefty stakes in blue-chip corporations and his own Hollywood production company, he flew to Columbus last weekend by private jet so he could catch his kid’s game against the school to which he’s donated more than $2m.

All of which ensured Bronny’s upbringing has been different. He lives in a $23m Brentwood mansion and attends Sierra Canyon, a traditional landing spot for the children of Los Angeles’ rich and famous where the annual fees are $37,000 and the basketball team has always been sprinkled with the sons of NBA legends. Younger even than his prodigy father was when he first gained national renown, he has already experienced a lot more online hate, premature fame in the social media age coming at a high price. With a schedule that takes his school team to eight different states, featuring 15 times on ESPN this season, the level of name recognition and the opprobrium are only likely to increase.

LeBron hasn’t emerged unscathed from his son’s emergence on the national stage either. In Las Vegas last summer for one of Bronny’s games in an AAU (elite youth club basketball) tournament, the four-time NBA MVP joined the teenage boys in their lay-up line during warm-ups. Much to their delight, this player they have all grown up worshipping then unfurled an outrageous dunk that immediately went viral. Most Americans saw an excited dad thrilling the kids for whom this will always be a memory and smiled. The naysayers, however, regarded it as a childish father somehow making his son’s day all about him.

Inevitably, Bronny’s impressive performances for Sierra Canyon this season have showcased his potential to such an extent there is already speculation about LeBron, in the midst of a resurgent campaign of his own with the Los Angeles Lakers, sticking around to one day play alongside his eldest in the NBA. A ludicrous notion perhaps given that he’s about to turn 35 and in his 17th sapping season as a pro. Nor is it something he would even entertain when it was put to him after defeating the Atlanta Hawks last Sunday.

“It’s not promised my son can make it to this level,” said James. “We don’t even discuss that. We live every day by every day and think about how he can continue to be a great teammate, be a positive role model to his little brother and little sister and, when he leaves the house, continue to hold the James last name with the utmost respect. Because it’s not just about him – and when I leave the house, it’s not just about me – it’s about our family and what we’ve created.”

Corbett helps Laois edge over the line in Ennis 17:45
Real Madrid forward Eden Hazard faces lengthy spell out after breaking ankle 17:41
Ireland suffer Twickenham torture yet again as England dominate 17:37
Westmeath reel Armagh back in to salvage a draw 17:33
Shane McGuigan 1-7 keeps Derry on the promotion trail 17:09
Here is your handy guide to sport on television this week