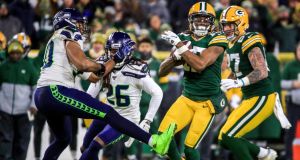 Davante Adams made eight receptions for a franchise postseason-record 160 yards and two touchdowns as the Green Bay Packers held on to defeat the visiting Seattle Seahawks 28-23 Sunday in an NFC divisional-round playoff game.

Aaron Rodgers completed 16 of 27 passes for 243 yards, and Aaron Jones gained 62 yards on 21 carries with a pair of 1-yard touchdowns for the second-seeded Packers (14-3), who will visit the San Francisco 49ers next Sunday in the NFC Championship Game. The 49ers beat the Packers 37-8 in Santa Clara on November 24th.

“We’re going to enjoy this one first and then get on to San Francisco,” Rodgers said afterward on the Fox broadcast. “Think the two best teams in the NFC (are playing for the championship). We’re going to have to go get out there and get a win.”

Russell Wilson led the fifth-seeded Seahawks (12-6), who won 17-9 at Philadelphia in a wild-card game last weekend, in both rushing and passing. Wilson was 21 of 31 for 277 yards and a touchdown and added 64 yards on seven carries.

“I think Russell was phenomenal,” Seattle head coach Pete Carroll told reporters. “He did everything he could have done.”

Tyler Lockett made nine receptions for 136 yards and a score. Marshawn Lynch twice scored on 1-yard runs but had just 26 yards on 12 carries.

The Seahawks nearly rallied from a 21-3 halftime deficit. Lynch scored on 1-yard run on Seattle’s first drive of the second half to make it 21-10.

Adams tallied on a 40-yard pass from Rodgers on the Packers’ next possession to push the lead back to 18 points.

The Seahawks then drove 84 yards in 12 plays, capped by a seven yard pass from Wilson to Lockett, to make it 28-17.

After forcing a three-and-out, the Seahawks were led by Wilson on a nine-play, 79-yard march, with Lynch scoring from the one, to make it 28-23 with 9:33 left. A two-point conversion failed as Wilson was sacked.

After another Green Bay punt, the Seahawks took over on their own 23 with 4:54 remaining.

After one first down, the Seahawks lost a yard on the next three plays, with Wilson being sacked by Preston Smith on third down, and punted. Green Bay was able to run out the clock with two critical third-down conversions - Rodgers found Adams for 32 yards on third-and-8 and then Jimmy Graham for nine yards on third-and-nine to seal it.

“They were doubling (Adams) a lot, and we made little adjustments. He had an unbelievable night, he carried us,” Rodgers said. “We ran the ball just well enough, and the defense made some stops.”

The Packers dominated the first half.

Adams scored on a 20-yard pass from Rodgers on Green Bay’s first possession of the game.

Seattle pulled within 7-3 on a 45-yard field goal by Jason Myers late in the first quarter.

Jones scored on a pair of 1-yard touchdown runs in the second quarter, the last with 1:30 remaining, to make it 21-3.

1 Tipping Point: Eddie Jones’s rhetoric is out of place in a febrile political climate
2 All in the Game: No Moore medals for Steven Gerrard
3 Added Time: What can be done about worrying trends at schools rugby matches?
4 Andy Farrell recalls 13 players to Ireland squad ahead of England clash
5 The Offload: James Ryan chuffed for Leavy and his new puppy
Real news has value SUBSCRIBE