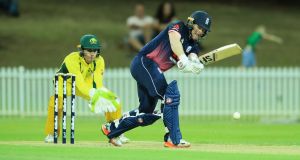 England began to put their Ashes woes behind them as their one-day side beat a Cricket Australia XI in comprehensive fashion to kick off the limited-overs leg of the tour Down Under.

Just four days after the final throes of their 4-0 Test defeat, the tourists switched formats and recorded a much-needed five-wicket victory against opponents featuring just one full international in Matt Renshaw.

Having restricted the hosts to 258 for nine on the back of Adil Rashid’s three for 45, captain Eoin Morgan hit an unbeaten 81 to ensure his side reeled the target in with half their wickets intact and 9.1 overs unbowled.

The appearance in the middle of umpire Claire Polosak, the first female to officiate a men’s domestic Australian match in October and now the first to stand in an England match, was arguably more noteworthy than much of the cricket.

Joe Root was restricted to net practice following the viral illness which brought a painful end to his own Ashes campaign but in his stead there were useful runs for each of the top four.

As well as Morgan’s anchoring knock, a 76-ball stay containing seven fours and two sixes, Jonny Bairstow (36) and Jason Roy (40) made decent contributions. But it was Alex Hales’ 52 that was arguably more notable in his first England innings since September’s night out in Bristol, the ramifications of which continue to keep Ben Stokes away from the international set-up.

Whether or not that is enough to see him into the team for the series opener in Melbourne on Sunday, when Root will surely return, is harder to discern.

Against a toothless attack there was only one real failure, Moeen Ali lingering just two balls to continue his miserable recent return.

His non-contribution was offset by a much better showing with the ball and was only window dressing in the bigger picture, as Morgan paired with Jos Buttler (28) and Sam Billings (15no) to hurry the result over the line.

England had been asked to field after losing the toss, allowing Mark Wood an early chance to prove his credentials.

The 27-year-old’s pace was missed during the Ashes but, having returned to full fitness, he returned to international action a matter of hours after being named in the Test squad for New Zealand.

The Durham seamer finished with somewhat ugly figures of nought for 68 but his fourth delivery of the match – a venomous throat ball at Renshaw – showed why he is such an alluring proposition.

After an opening stand of 49 it was left to Liam Plunkett to get England going, taking Renshaw’s edge with his third delivery on tour.

Both batsman and bowler were born in Middlesbrough and the link runs deeper, with Plunkett having been tutored in maths by Renshaw’s mother.

Travis Dean top scored with 62 before tamely lifting Moeen to cover and Rashid quickly did for Jake Carder.

By the time Jake Doran was run out at 123 for four England looked ready to pounce, but they had not reckoned with 17-year-old Mackenzie Harvey’s cameo of 59 in 48 balls.

He gamely used Wood’s pace against him, upper-cutting his first six and then hoisting successive bumpers over the ropes at fine leg.

Harvey’s fourth maximum was a collector’s item, creaming Plunkett over cover, but when Rashid had him stumped it allowed England to regain control and keep their chase eminently manageable.