Game plan centring on Jones, Freeman and Coleman pays off for determined Atlanta side 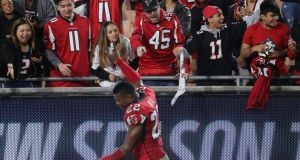 The Atlanta Falcons were determined not to collapse again. Not after what they had been through over the past year. Already weary of hearing “28-3,” referring to the lead they had given up in their Super Bowl loss to the New England Patriots last winter, the Falcons were further haunted by a series of collapses during the regular season.

But having made it back to the playoffs, the Falcons held on to a healthy early lead Saturday to secure a 26-13 wild-card victory over the Los Angeles Rams at Los Angeles Memorial Coliseum. The Falcons avoided pitfalls by sticking with a game plan that centred on receiver Julio Jones and running backs Devonta Freeman and Tevin Coleman.

That 10 of their first 13 points came courtesy of fumbles by the Rams’s punt and kick-off return teams, setting up remarkably short scoring drives, was almost beside the point. Atlanta made the most of its opportunities, built a 13-0 lead and then hung on to it once the Rams’ offence came out of a funk.

In an on-field interview after the game, Atlanta’s Matt Ryan laughed when asked how the game had compared to the Falcons’s difficult season. “This game was kind of the way our season’s been: tough,” he said. “We had to grind it out.”

Ryan completed 21 of 30 passes for 218 yards, doing his best to deal with tremendous pressure created by Aaron Donald, the Rams’s dominant defensive tackle. Most of Atlanta’s damage came from its running game, which ground down the clock once the lead was built. The strategy let the Falcons dominate time of possession, 37 minutes, 34 seconds compared with 22:26 for Los Angeles.

Freeman carried the ball 18 times for 66 yards and got some serious – and potentially illegal – help from Alex Mack on a touchdown run in the first half. Freeman was falling to the ground in front of a group of defenders when Mack lifted him up and carried him through the pile into the end zone. NFL rules explicitly state that a team-mate may not lift a ball carrier to continue his forward progress, but the penalty is rarely called, and the Rams did not challenge the touchdown.

Coleman added 40 yards as the Falcons combined for 39 carries for 124 yards. That helped set up plenty of opportunities for Jones, who had nine catches for 94 yards. It was a rare red-zone touchdown by Jones in the fourth quarter that iced the victory. The loss by the Rams ended a remarkable turnaround year in which the team improved by seven wins from last season, while its offence went from the worst in the NFL to the most potent.

There were flashes of that offensive brilliance on Saturday night, with quarterback Jared Goff having a strong game after a silent first quarter. Todd Gurley, who led the NFL in yards from scrimmage, averaged 7.2 yards a carry on his way to 101 rushing yards, and receivers Robert Woods and Cooper Kupp had their share of highlight-reel plays.

But the Falcons, who had preceded the Rams as the league’s top-scoring team, had more to offer on both sides of the ball, and they will move on to face the top-seeded Philadelphia Eagles in the divisional round. The ghosts of the Super Bowl collapse could hardly be exorcised by one playoff win, but the perseverance the Falcons showed in Los Angeles should give them something to build on.