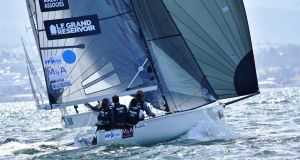 A black flag disqualification in the final race of the SB20 World Championships put paid to Dubliner Michael O’Connor’s top 10 chance overall in Tasmania on Thursday, one of three Irish boats competing on Hobart’s river Derwent.

The reigning Corinthian champion had to be content with 13th overall, but the Royal St George Yacht Club helmsman sailed his best race of the 12-race series, taking a second in the 59-boat fleet in the lighter winds of the penultimate race.

Light northeasterly breezes suited the European crews, filling seven of the first eight placings in race 11. It was a tour-de-force for French crews who took first and second overall.

Back in the hunt

Up to 20 Irish sailors are due in Antigua next month for the Royal Ocean Racing Club’s (RORC) Caribbean 600 event. Adrian Lee’s Cookson 50 Lee Overlay Partners (Royal St George YC), winner of the first RORC Caribbean 600 in 2009, is back in the hunt, and up against such other noted Cookson 50s as American Ron O’Hanley’s Privateer. Northern Ireland’s Ian Moore will navigate on the Elliott 52 Outsider. Conor Fogerty’s Sunfast 36000 Bam! (Howth YC, class winner in 2016) is very much in the hunt, his crew including Mini-Transat veteran Tom Dolan.

The National Yacht Club (NYC) in Dún Laoghaire has been awarded the Mitsubishi Motors Sailing Club of the Year. The NYC’s pre-eminence during 2017 arose from a combination of events and anniversaries which resulted in the club going through the year “on top of its game”, according to judges.

It was the Golden Jubilee of its junior training programme, which dated back to 1967 when a key figure was Carmel Winkelmann, co-ordinating the efforts of parents encouraged by Olympian Johnny Hooper, with the late Paddy Kirwan playing a leading role to create Ireland’s first fleet of Optimist sailing dinghies.

The Club of the Year trophy has run since 1979, and the NYC has won it four times previously, the most recent being six years ago in 2012. Now, with five wins, they are second only to Royal Cork on that leaderboard.

Organisers are reporting a “significant” drop in the Dún Laoghaire Motor Yacht Club (DMYC) dinghy Frostbite fleet numbers this winter. Numbers are down from a typical 80-90 boats. A renewed call by the West Pier club is being made for entries for series two this Sunday that features in-harbour racing for Lasers and mixed dinghy fleets.

Two upcoming winter lectures in Dún Laoghaire might encourage some sailors and non-sailors away from the fireside.

Maurice O’Connell will give a talk in the Royal Irish Yacht Club on Friday, January 12th, on his 2016 world championship victory stateside. “The ‘Embarr’ Journey to winning the Melges 24 World Championship” recounts his win with RIYC skipper Conor Clarke.

And in the DMYC, a bicentenary review of the construction of Dún Laoghaire Harbour by historic building consultant Rob Goodbody will be held on February 1st.

The adventures of Rogue Trader with sailors Claire McCluskey and Nick Russell will feature at Irish Sailing’s Cruising Conference next month. The Northern Ireland pair will recount their journey to buying, restoring and registering the 56ft wooden ketch and then sailing west in the Atlantic Rally for Cruisers.

The third Cruising Conference 2018 returns to Dublin on February 17th at the Clayton Hotel in Leopardstown, Co Dublin.