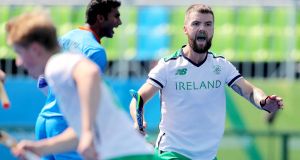 Pembroke’s Alan Sothern will be a threat to Mossley, with the striker scoring twice last weekend to increase his very impressive 17 goals in 10 IHL games. Photograph: Dan Sheridan/Inpho

Having squeezed past Belfast Harlequins 5-4 last weekend in a shootout after the match finished 1-1, Ulster side Mossley are straight back into testing conditions this weekend.

Pembroke know all about shootouts having lost to Three Rock Rovers on St Stephen’s Day in the Neville Cup final and also know about comebacks from last time out in this competition.

Going 4-0 up before half-time, only to win the fraught match 4-3, should be a salutary lesson for the Irish Hockey League (IHL) side as they travel north for the second week in a row.

Mossley see Alan Sothern as the most dangerous of the Pembroke forward line. They are right to be concerned: the Irish striker scored twice last weekend and has notched up a very impressive 17 goals in 10 IHL games.

Rovers should like the look of this one if IHL form is anything to go by. They sit second on the IHL table, while Cookstown are struggling to move away from the bottom with only Railway below them.

In that respect Railway have the toughest assignment of the weekend facing Lisnagarvey for a place in the quarter-finals. Like Cookstown, Railway have won just one match from 10 outings at IHL level with this week’s opponents, Lisnagarvey, sitting third on the table but with a couple of games in hand.