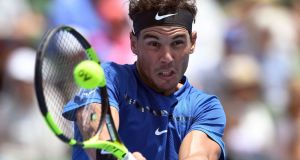 Former champions Stan Wawrinka and Rafa Nadal gave Australian Open organisers a massive boost on Tuesday when they both said they were looking forward to next week’s season opening Grand Slam after battling long-term injuries.

The Australian Open has been hit hard by absences with Andy Murray, Serena Williams and Kei Nishikori among those to have withdrawn, while Nadal and Novak Djokovic have also been struggling with injuries.

Wawrinka has been battling a knee injury and has not played since he was knocked out in the first round of Wimbledon last year, and the Swiss was one of the major question marks heading into the January 15th-28th Australian Open.

“I’m really, really happy to be back on the Tour and seeing the sun,” Wawrinka told reporters after an event with the tournament’s ball kids at Melbourne Park on Tuesday.

“For me, the first thing is to play a match, to play a tennis match again. It’s been many months out of the tour.

“It’s not always the best when you are an athlete so I’m looking forward to it, enjoying the crowd.

“Still a lot to do but I’m feeling really positive so looking forward to starting,” added the three-times Grand Slam winner.

“There’s been a lot of questions and in fact this is the first time publicly in six months that he’s said anything, so we are excited that he agreed to come here and do it with the ball kids,” Tiley said.

“So he’s ready to play. I’ve watched him practise. Obviously to play best-of-five-set matches and to play seven of them in two weeks, he’d need to have a lot of things go his way.

“But, as he indicated this morning, he will be ready to play and it’s great to see him out here.”

Tiley’s mood would have improved even further after Nadal returned to the court for an exhibition match at the Kooyong Classic.

The Spaniard had also been battling a knee injury and had not played since the season-ending ATP Tour Finals in London.

He withdrew from a warm-up tournament in Abu Dhabi and last week’s Brisbane International and had been concerned with his match fitness.

“It was a good test for me and good practice,” the 16-times Grand Slam winner told reporters after his 6-4 7-5 loss in which he appeared to be moving freely, if a little rusty in his shotmaking.

“I’m good and I am here so that’s good news and my idea is just to keep practising the next couple of days to be ready for the beginning of the Australian Open.

British number one Johanna Konta was bundled out in the first round of the Sydney International by Agnieszka Radwanska and Venus Williams also lost in her first match of the tournament on Tuesday.

Radwanska, overpowered in 82 minutes by Konta in last year’s final in Sydney, raced to a 6-3 7-5 victory over the Briton at the Olympic Tennis Centre.

Neither player was able to dominate on service in the first set and Konta won just two of her 11 second-serve points as Radwanska converted three of her five break opportunities.

Konta again had trouble holding serve in the second set but showed signs of a fightback when she broke while trailing 4-1, but she could not push on as Radwanska sealed victory in one hour, 49 minutes.

Kerber started the first set stronger and looked to have the American on the ropes when she opened up a 5-3 lead.

However, the seven-times Grand Slam champion survived the Kerber onslaught and with her confidence restored, took the first set.

But Kerber fought back strong as her opponent struggled with her service.

The German levelled the match at a set apiece and raced into a 5-0 lead in the decider. The 37-year-old rallied again but succumbed to the inevitable on Kerber’s fifth match point, sending a backhand return wide.