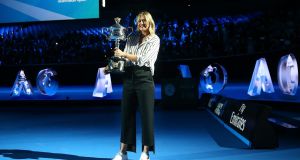 Maria Sharapova of Russia arrives on court with the the Daphne Akhurst Trophy during the 2018 Australian Open Official Draw at Melbourne Park. Photo: Scott Barbour/Getty Images

If Johanna Konta wants to win her first grand slam title in the country where she was born – and she is among a slew of contenders hoping the absence of the title holder, Serena Williams, will open up the draw over the next fortnight – she may have to beat the 2008 champion, Maria Sharapova, to reach the final.

Sharapova has already made an impact here, if not quite the one she and the tournament organisers would have wanted, when she took Williams’s prestigious place on the podium for Thursday night’s televised draw. The occasion had an uneasy air about it when the Russian – whose last appearance here was two years ago, losing to her American rival in the quarter-finals and then serving 15 months for failing a drugs test – was invited to share the opening ceremony spotlight with the men’s champion, Roger Federer.

Williams – who decided not to defend her title because of the birth of her daughter in September – would normally have had that honour, and the tournament director, Craig Tiley, was asked if he thought it appropriate to so honour a tarnished player, who is ranked 47 in the world.

“In fairness to Maria, the adjudication has occurred on that,” Tiley said. “She’s a former champion at the Australian Open, 10 years ago – like it’s the 30-year anniversary of this great Melbourne Park, and Billie Jean King arrived this morning. It is [50 years] since she won. Maria deserved the opportunity.”

The player also had the easiest of rides in her on-stage interview with the host broadcaster, Channel 7. “After being away for such a long time, there are adjustments,” she said. “They haven’t come easily. I have to back off sometimes and say this will take time. I never contemplated retiring but when I was a teenager I never thought I’d play past 30 years old. I thought I’d win a few tournaments and then have a family. And here I am in a sport that has given me so much – and I hope to have a family too.”

In her autobiography last year, Sharapova observed of Williams, who has a 19-2 career record over her: “[Her] physical presence is much stronger and bigger than you realise watching TV. She has thick arms and thick legs and is so intimidating and strong.” Those observations created a brief but considerable storm.

Sharapova’s involvement in the draw ceremony would be rendered irrelevant if she were to lose in the first round to the German Tatjana Maria, who is also aged 30 and is ranked one place above her in the world.

It is some ask for Konta to beat the world No1, Simona Halep, to get out of the quarters and then Sharapova if they both reach the semi-finals. The British No1’s first match – while still guarding a sore hip she picked up in Brisbane last week – is against Madison Brengle. The American beat her when they first met, in 2015, but could take only four games off her in the rematch a year later in Indian Wells.

Halep could be vulnerable. She has lost in the first round here four times in seven visits, although she should start with a win against the talented Australian wildcard Destanee Aiava.

Heather Watson is in the same half of the draw as Konta, and plays Kazakhstan’s Yulia Putinseva in the first round. Lurking in her quarter are the eighth seed, Caroline Garcia, the former champion Angelique Kerber, who has found a bit of form, and the 2017 US Open finalist, Madison Keys. - Guardian service

Andrew Conway and Billy Holland sign contract extensions 10:54
Solskjaer complains about Molten balls after Brugge draw 08:12
Celtic’s Fraser Forster explains fourth penalty save of the season 08:03
United and Celtic grind out away draws; McIlroy leads the way in Mexico 07:30
Cian Healy’s hunger for battle undiminished by the years 06:00
Here is your handy guide to sport on television this week