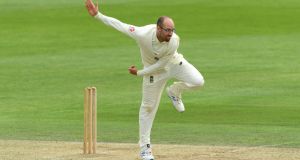 England’s spinners came to the fore in thrilling style and Dom Sibley passed a significant test of character as the tourists sealed a 2-0 series win over Sri Lanka on a dramatic day in Galle.

Joe Root’s side had spent most of the first three days chasing the game in this second Test but made their move emphatically on Monday, with Jack Leach and Dom Bess flooring the accelerator as they shared eight wickets to bowl Sri Lanka out for just 126.

That left England chasing a potentially thorny 164 for victory, with a wearing pitch and an ebullient Lasith Embuldeniya standing in their way.

For once they had to get there without a significant contribution from the bat of captain Root, with Sibley and Jos Buttler sharing a priceless stand of 75.

Buttler’s 46 not out came quicker, more pleasingly and with a greater degree of confidence but he has been in good form for some time and is a well-renowned player of spin, meaning Sibley’s hard-working 56no was the more significant.

After managing just six runs from his previous three innings the opener was facing rising speculation over his place for next month’s tour of India and dug in to play his part.

He did need the benefit of ‘umpire’s call’ to save him from three separate lbw appeals, but he was tighter in defence and found a way to open up scoring areas and see his team home with the winning run.

Victory was England’s fifth in a row overseas, stretching back to last winter’s trip to South Africa and matching a streak last seen in 1914.

The day began with the demise of England’s first innings, Leach trapped lbw early. England’s 344 all out left them 37 behind, hardly a mountainous number but one that was still worth plenty on a deteriorating pitch.

The state of the surface, allied to Embuldeniya’s 10-wicket match haul, meant there would be no hiding place for Leach and Bess. Nor would they need one as the claimed four for 59 and four for 49 respectively.

Leach was into the game after four cursory overs of seam and, having sent down 228 deliveries without joy in the first innings, needed just two to strike here as Kusal Perera was given lbw off the midriff.

Bess took a little longer to find his radar but, as soon as he did, the rewards were instant. His attacking line and just enough turn brought the simplest of bat-pad chances from Oshada Fernando.

While Zak Crawley could take catches like that in his sleep the next one off Leach required a degree of bravery and sharp reactions, staying low and picking up Lahiru Thirimanne off the middle of the bat. Having been 37 for two, Sri Lanka would lose five for 41 in little more than 11 overs.

Experienced duo Angelo Mathews and Dinesh Chandimal let their side down, Mathews hitting fresh air with a slog-sweep and losing his off stump to Bess before the captain responded to Root’s request — audibly uttered from slip — to “give it away” by doing just that. A huge top edge went high over mid-on where James Anderson held a nerveless over-the-shoulder catch.

Niroshan Dickwella, fresh from a career-best 92, drilled Bess tamely to cover, Crawley’s handiwork passed the test again as Dilruwan Perera nudged Leach to short-leg and Ramesh Mendis edging behind via a healthy edge into his boot.

The fightback came from Embuldeniya, who beat his first-class best to make a counter-attacking 40, with six fours and one six off Leach. In the end Root gambled on his own off-breaks and dismissed both him and number 11 Asitha Fernando with successive balls.

Asked to complete the second highest chase at the ground, England lost Crawley for 13 as Embuldeniya completed a full house of four dismissals against the Kent man.

Despite the breakthrough the walls never closed on in England, with too many soft balls on the pads and a cautious field that allowed low-risk runs. There was intent too, though, with Sibley middling a sweep for four and Jonny Bairstow hoisting six over long-on and, somewhat comically, into a bucket of white paint.

In the 12 overs before tea England had taken 46 from the target but they needed luck too, Sibley’s progress helped by a couple of handy decisions from the umpire and Bairstow judged not out with a suspicion of glove.

Sri Lanka hit back with a spell of three for 27, starting when Embuldeniya surprised Bairstow (29) with an arm ball and finishing when Dan Lawrence was caught behind off bat and pad for the left-armer’s 10th of the match.

In between came the big wicket, Root gloving Mendis into leg stump for 11 as he looked to sweep him round the corner. With 75 England needed one last push and it came in the form of Buttler’s confidence and Sibley’s concentration.

Buttler belied the circumstances to motor on at almost a run-a-ball but Sibley’s stern accumulation earned him a half-century and the nudge to flick the decisive run.