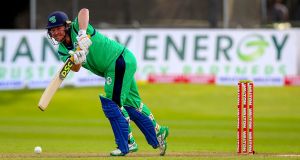 Rahmat Shah produced a brilliant unbeaten century to steer Afghanistan to victory over Ireland and secure an unassailable 2-0 lead in their one-day international series in Abu Dhabi.

Rahmat made 103 from 109 balls as Afghanistan reached their victory target of 260 with 28 balls to spare, the right-hander hitting two sixes and 10 fours.

Hashmatullah Shahidi provided Rahmat with superb support with 82 from 100 balls as the pair put on 184 for the third wicket following the loss of openers Rahmanullah Gurbaz (31) and Javed Ahmadi (16).

Hashmatullah eventually fell with Afghanistan needing 28 to win, but a quickfire 21 from captain Asghar Afghan helped see his side comfortably over the line.

Ireland had earlier won the toss and elected to bat, with opener Paul Stirling making a brilliant 128 from 132 balls which featured four sixes and 12 boundaries.

Stirling and Curtis Campher (47) put on 106 for the fourth wicket but Afghanistan’s bowlers kept the run rate down and Ireland eventually had to settle for a total of 259 for nine from their 50 overs.

Naveen-ul-Haq got the crucial wicket of Stirling and finished with figures of four for 42 from his 10 overs.

Ireland skipper Andrew Balbirnie praised Stirling’s effort and pointed to the death on Saturday of former Ireland bowler and long-time team manager Roy Torrens at the age of 72 as providing the Belfast batsman’s motivation to do well as a mark of respect.

He said: “Paul seems to have a fantastic tour every time we go away - he was very close to the late Roy Torrens who we unfortunately lost yesterday, and you could see that that innings today was for him.”