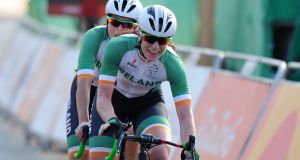 The 2017 and 2018 paracycling world time-trial champions Katie-George Dunlevy/Eve McCrystal made it a treble on Thursday, winning yet another tandem gold medal at this year’s championships in Emmen, the Netherlands.

Dunlevy and McCrystal have been the big stars of the Irish paracycling team in recent years, and will attempt to defend road-race crowns also won in 2017 and 2018 on Saturday.

“That was tough,” Dunlevy said afterwards. “We had form coming into it from our previous results. I believed that we could do it, and I really, really wanted this one. I know Eve did as well. It was a flat course and that suited us, but it was a long, hard TT. We fought all the way. I am absolutely delighted to win again.”

“It was windy at the back end of the course. We could see a few riders ahead of us and it was nice to have that carrot to chase at the end.”

Ronan Grimes was next best of the Irish team on Thursday, netting fourth in the MC4 individual time trial. He finished 1 minute 20.73 seconds behind the Slovakian winner Jozef Metelka.

In Spain, race leader Primoz Roglic (Team Jumbo-Visma) took another step closer to winning the Vuelta a España when he finished second on stage 18 of the race on Thursday. The Slovenian rider led home a four-man group 15 seconds behind the solo winner Sergio Higuita (EF Education First), outsprinting world champion Alejandro Valverde (Movistar Team) and two others to the finish line in Becerril de la Sierra.

The resulting time bonus saw him extend his overall lead over Valverde to 2 minutes and 50 seconds, while Valverde’s teammate Nairo Quintana, who had started the day second overall, was unable to stay with the others and slipped to third overall.

In addition to taking a time bonus, Roglic also extended his lead in the points classification.

However with Friday’s and Sunday’s stages likely to finish in bunch sprints, Bennett could well make gains. Each stage offers 25 points to the victor, while the intermediate sprints convey a maximum of four points. If he is to challenge for the final green jersey he will hope that a breakaway group mops up the available points on Saturday’s final mountain stage.

Mathieu van der Poel (Corendon-Circus) placed sixth in the time trial and retakes the overall lead from Matteo Trentin (Mitchelton-Scott). Dunbar is best of the Irish in 55th overall, and remains third overall in the King of the Mountains classification.