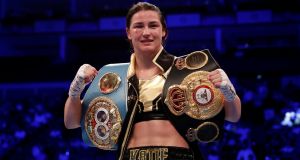 Top US boxing promoter and television producer Lou DiBella has questioned the power behind Katie Taylor’s punches as the undisputed lightweight champion of the world lines up her next fight in the UK on November 2nd.

Taylor will face an as yet unnamed opponent in her first bout since becoming the four-belt lightweight world champion after a narrow majority decision win over Belgium’s Delfine Persoon in Madison Square Garden in New York last time out.

Judges Allen Nace and John Poturaj gave her the win 96-94, while Don Trella scored it a draw. Taylor, 32, claimed Persoon’s WBC title to add to her WBA, IBF and WBO crowns.

Taylor and her team manager Brian Peters and promoter Eddie Hearn, have agreed the November date and also to meet the celebrated puncher Amanda Serrano in early 2020 in a highly anticipated match-up following some verbal sparring on social media between the Irish and Puerto Rican fighters. Di Bella is the promoter of Serrano.

“You saw that level in the Katie, Persoon fight. Obviously Katie is a better boxer, more polished,” said DiBella. “Katie is the best pure boxer,” he added. “If you look at anything in Katie’s armour as an issue, she doesn’t have a lot of power.”

Taylor has won six of her 14 professional wins by TKO or her opponent retiring. But DiBella believes that the former Olympic champion is not untouchable and that US double gold medallist Clarissa Shields, not Taylor, is the standout and most famous woman’s boxer in the US.

“So I think she [Taylor] is not on an island [out on her own],” said DiBella. “She’s a tremendous boxer but as you saw with Persoon, she is not undefeatable.

“I’ll tell you this,” he added. “Amanda and Katie is a tremendous fight. It really is. I have never promoted a woman or even seen a woman with the punching power of Amanda pound for pound. She is the biggest puncher in women’s boxing I’ve ever seen.”

While Taylor waits on her opponent for the November fight to be announced and Hearn has hinted that she might go up a weight division to super lightweight, Serrano meets fellow New Yorker Heather Hardy on Friday night in the MSG Theatre in New York.

“The winner of Hardy and Serrano will have a deal for Katie Taylor, ” said DiBella. “There is a deal in place for that fight to happen in short order. So really that match of a boxer puncher against a pure puncher is a dream match-up.”

DiBella added that women’s boxing in the US has undergone tremendous change with fighters coming through in all weight divisions.

“Clarissa Shields who won the gold medals, in America she is the bigger name,” said DiBella. “Thirty years ago women’s boxing was like a fad. If you go into Gleeson’s gym in New York right now there are as many women working out as there are men.”