Steve Smith reminds Archer who the phenomenon is around here

We came for Archer v Smith, part two. What we got was a slow-paced pitch 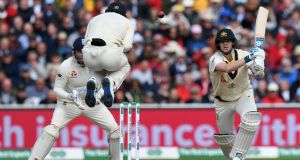 Steve Smith plays a shot on the first day of the fourth Ashes cricket Test match between England and Australia at Old Trafford. Photograph: Getty Images

At 11 minutes past four, as the first sozzled mid-afternoon cheer began to break around a wind-picked Old Trafford, Jofra Archer bowled a sharp, straight bouncer. Steve Smith ducked, splayed his feet and watched the ball arc past his nose. So far, so predictable.

Except, not quite. A post-work TV viewer coming to the moment blind and expecting fire, battle joined and tumbling wickets might have wondered why Archer was bowling in a short-sleeved jumper. On the TV monitors the speed gun flashed up: 82mph.

Never mind the pre-match talk of barrages and pepperings. That late-afternoon bouncer was Archer’s first straight one of the day, the fifth ball after a three-hour rain break, with Smith by now on 30 not out and cruising.

The previous delivery had been delayed by a beach ball escaped from the Party Stand that came barrelling along at an exhilarating lick past the stumps, from where Smith swept it away with his bat all the way to the deep point boundary.

Smith followed this with a rapid-fire version of his post-delivery fiddle routine – pad roll, pad roll, helmet and box – unveiling the previously unseen beach ball variation just to keep himself in the bubble. And almost immediately the players were off again, sent haring back to the pavilion by horrible, drenching sideways sheets of rain.

It was that kind of afternoon on a day of buffeting wind, billowing covers and crowds crammed into the narrow causeways nursing foamy yellow pints through the drizzle.

We came for Archer v Smith, part two. What we got was a slow-paced pitch and something more faithful to the rhythms of this insistently slow-burn form; not to mention more in keeping with Smith’s own status as a great of the game.

In reality there was always something fanciful in the idea Smith would be fazed by Archer bowling short; and a slightly grim edge of blood-lust after Smith had been struck so painfully at Lord’s. His method is so distinct the idea persists there must be some fatal flaw, some way of unravelling him and reasserting the rules of orthodoxy. But the notion that high pace might be the magic bullet overlooks some key evidence to the contrary.

First, Smith’s great superpower is the opposite of this, a magical degree of hand-eye co-ordination and a control over his own movements that seems to slow the day, to give him more not less time even in the face of fast bowling.

Plus Smith has never given any indication whatsoever in six and a half thousand Test runs of being vulnerable to pace. Only one genuinely rapid bowler, Umesh Yadav, has got him out more than three times. Smith has played 12 Tests against Archer, Mark Wood, Shannon Gabriel and Kemar Roach and never been dismissed by any of them. Dale Steyn, the best fast bowler of the age, has got him once in four Tests. Archer is a hugely talented bowler at the start of his England career. But Smith is the phenomenon around here.

Of the two it was Archer who looked a little nervous, a little eaten away by the moment at Old Trafford. As is to be expected. It is easy to forget how far Archer has come. His manner is so easy, his movements so balanced you half expect to look down and notice he’s running in to bowl in a pair of espadrilles. The mechanics of his action are so efficient it is tempting to describe his speed and accuracy as natural or unthinking, a gift from the gods.

Whereas in reality Archer has done this himself, is famously assiduous in the nets, has a cricket badger’s love of the fine points of his sport, and has relentlessly honed his techniques. This is all hard-won refinement. There will be glitches and bumps in the road three Tests into his career.

In the event Archer bowled only seven balls of the 48 Smith faced before lunch. There had been a huge roar as Smith prepared to face him for the first time at 28 for 2. David Warner had already been dismissed by the fourth ball of the day. Stuart Broad has got Warner five times in four Tests, having dismissed him five times in 18 before that. That change of angle, the teasing line: this is a really fine piece of planning and execution.

Archer had been trundling in up to that point. Later on he cranked it up to 89mph on a tired looking surface. But Smith was fluent from the start, with the full range of nudges and flicks and one brilliantly funny collapsing square-drive off Stokes, Smith meeting the ball with the full, sweet face of the blade, even while tripping over his own ankles.

He ended the day on 60, with Australia well-placed at 170 for 3. Archer v Smith: the bumper war may yet materialise. For now it is Smith’s craft on a placid surface that is once again setting the tone.