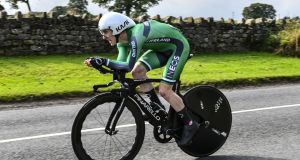 When cycling’s elite world road-race championships begins in Leeds on Sunday, Eddie Dunbar will have a vitally important role on the Irish team. The Corkman just turned 23 this month but, along with Dan Martin and Sam Bennett, he will be one of the protected riders on the squad.

They will have the backing of three other Irish contestants in the event, namely Ryan Mullen, Conor Dunne and Rory Townsend. The latter trio will do what they can to help one of the three others grab the iconic rainbow jersey awarded to cycling’s world champion.

Dunbar’s protected status owes to his talent and also to the strong results he has amassed this season. In May he finished third overall in the Tour de Yorkshire and then took third on a stage and 22nd overall in his first Giro d’Italia. In June he was second on a stage and fifth overall in La Route d’Occitanie, then returned to Ireland to net second in both the national road-race and time-trial championships.

“It has been a really consistent year,” Dunbar said in advance of the world championships. “There have been a few results along the way. I have come on a lot, I have learned a lot. I am literally stronger as a rider as well.”

Dunbar revealed that he was supposed to ride the Vuelta a España, something which was previously undisclosed. Getting a nod for the Spanish Grand Tour after earlier making his three week debut in the Giro d’Italia is a reflection of how highly the young rider is regarded by his Team Ineos squad, but he unfortunately had to rescind his place on the team.

A bad saddle sore made sitting on his bike very uncomfortable and as such an injury was likely to be exacerbated by a three-week race, he opted instead to rest and allow his body to recover. He then resumed competition with a less-intense racing programme.

After riding the Tour of Britain, Dunbar finished sixth earlier this month in the Giro della Toscana in Italy. He was one of the strongest in the finale despite saying that his legs felt empty on the day. More recently, he was a decent 26th in the time-trial at the world championships on Wednesday. He’s a light rider whose physical make-up positions him as a climber rather than a time trialist, but he nevertheless finished ahead of many well-established professionals.

If Sunday’s race blows apart on the tough course, Dunbar will hope to be there in the finale, using those climbing abilities to chase a medal. But if, as is possible, the race comes down to a small bunch sprint, he and Martin will together ride to help Bennett who is, arguably, the fastest sprinter in the world.

Dunbar can see the race going either way. “It is hard enough that it could be good for the two of us, for myself and Dan,” he says. “But it is possible that it could come down to 20, 25 guys at the finish. Or it could be groups everywhere . . . four guys up front, five guys behind, a slightly bigger bunch behind that. It just depends on how it is raced.

“If it is raced hard before the [seven laps of the finishing] circuit, I think a lot of guys might pull the pin, just because the circuit is just so hard. If not, if guys get to the circuit relatively fresh, you would be surprised how many guys can just switch on for those seven laps and be there at the end. I think Sam can be one of them, for sure.”

If the latter pattern plays out, Bennett should indeed be a factor. He took two stage wins at the recent Vuelta a España and was second on four other stages. He is impressively fast in the sprints but is also able to climb far better than most of the gallopers.

“I think he has shown the form he has had in the Vuelta,” says Dunbar. “If Sam is at his best, I do really think he can be up there.”

Dunbar is looking forward to Sunday’s race, and emphasises the importance of the Irish squad pulling together in service of whomever is best on the day.

“I think it bodes well to have such a big team there . . . I think we have someone to cover everything. If there are three of us there in the final, that would give us plenty of options. It is important that we are tactically aware and when the moment is right, that we go all in for one person.

“Whether that is me, Sam, Dan, whomever it is, it is important that we do that, come together as a unit and use that to our advantage.”