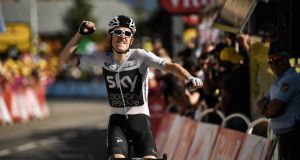 Britain’s Geraint Thomas celebrates as he crosses the finish line to win the 11th stage of the 105th edition of the Tour de France cycling race between Albertville and La Rosiere. Photo: Marco Bertorello/Getty Images

And then there were two. In a fulminating finale to the first ski station finish of this year’s Tour de France Team Sky crushed their rivals and gave themselves two solid options on overall victory in Paris on July 29th.

In pole position is Geraint Thomas, shadowed by the champion, Chris Froome. With so many other teams failing to match their team’s collective strength the chances of Sky faltering look slim.

Thomas took the yellow jersey after hammering home the team’s striking advantage; he looks good in yellow but he also seems to know his place. The mantra at Sky is that Froome is No 1, that he has won six Grand Tours and that Thomas is happy just to have his moment in the sun.

But the Welshman is no slouch, no one-day wonder. He has won Paris-Nice, the Critérium du Dauphiné and Olympic and Commonwealth gold. His apprenticeship has been hard-fought and long enough for him to know that, now he is in his thirties, this may be his best chance in the Tour.

It was a good day for Ireland’s Dan Martin who improved his general classification to move up to 10th, three minutes and 16 seconds behind Thomas after a sixth place finish on stage 11.

“I’m just going to enjoy being in yellow in the Tour de France,” Thomas insisted afterwards, “even if it’s just for a day it’ll be great. I’d love to keep it for a few days but we’ll see tomorrow how it goes.”

Asked if he would take his chance to win the Tour, even at Froome’s expense, if the moment came, Thomas demurred. “Some guys might sit here and give some PR bullshit but I just say how it is with me and that’s how it is. Froomey is the leader.

“I’m not going to sit up and lose time, but I think we’re in a great position. It’s just a bit of an unknown for me to race over three weeks. It’s the ideal scenario at the moment and long may it continue.”

Yet even the best of friends can see ambition ruin their relationship. While the Wiggins-Froome feud of 2012 was briefly reprised earlier this week, when Bradley Wiggins suggested the Team Sky principal, Dave Brailsford, was “divisive” and “self-serving” a better comparison is perhaps with the all-star La Vie Claire team of 1986 which imploded as the American Greg LeMond crossed swords with his ageing mentor, Bernard Hinault.

While Sky pondered how best to divide the spoils of their success, they left a trail of broken ambitions scattered across the mountainsides.

Only Tom Dumoulin, runner-up to Froome in this year’s Giro d’Italia, is within two minutes of the team’s British pairing. Only Vincenzo Nibali, Primoz Riglic, Steven Kruijswijk, Mikel Landa and Nairo Quintana are within three.

For Quintana’s Movistar team, it proved a make-or-break stage. The Colombian’s Spanish team mate Alejandro Valverde launched an ambitious attack 55km from the finish but wilted on the final climb. That may have been the platform for Quintana or co-leader Landa to go clear, but under the pressure of Sky’s high tempo riding both were found wanting.

Further behind, Rigoberto Uran, second overall last year to Froome, appeared listless and lost, struggling with knee injuries sustained in the cobbled stage to Roubaix. The Colombian is now more than half an hour behind Thomas and his team will revert to hunting for stage wins.

At the back of the peloton, the scene was even more torrid, with Mark Cavendish left to fend for himself after his team mates were forced to leave him on the first steep climb, the Montée de Bisanne. His Tour, like that of rival sprinter Marcel Kittel, is over after he finished 65 minutes behind Thomas and far outside the time limit.

Cavendish crossed the line and rode on to his hotel, leaving his team manager, Doug Ryder, to sum up his dismal Tour. “You never write off someone like Cav and he’s still young,” Ryder said. “Guys like [Andre]Greipel are still winning stages and they’re two or three years older than Cav. His mind is very strong. He wants it badly. I think it’s just physiology.”

“We were hoping that he would get through today and tomorrow so that he could focus on Friday,” Ryder added, referring to the next likely sprint finish. “We thought Cav would get better but I guess the lack of racing over the last two years has affected his power to get through tough tours.” – Guardian service