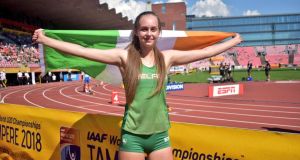 Sommer Lecky celebrating her silver medal performance in the high jump at the World Under-20 Championships in Tampere, Finland. Photograph: Cathal Dennehy/Twitter

The future of Irish athletics keeps coming on fast – Sommer Lecky adding her name to the suddenly blossoming young stars when winning another silver medal in the high jump at the World Under-20 Championships in Tampere, Finland.

Between the track and field, it brings to six the number of medals Irish athletes have won in youth and junior championships over the past 10 days – three gold, three silver, and all by young Irish women with the prospect of more to come.

The 17-year-old Lecky, from the Finn Valley club in Donegal, possibly surpassed her own expectations and certainly her previous best.

She twice improved the Irish Under-20 record, clearing 1.87 metres and then a stunning 1.90m on her first attempt, which ultimately won her silver – also qualifying her for next month’s European senior championships in Berlin.

After the women’s sprint relay team also winning silver medals on Saturday afternoon, it also doubles the number of medals Ireland have won in these championships in their 32-year history: Antoine Burke also won silver in the men’s high jump back in 1994, and Ciara Mageean also won silver over 1,500m in 2010 – these Under-20 championships not so much a stepping stone to the senior stage as an early taste of it.

“I knew I could jump that high,” said Lecky.

“So if I knew that in my mind, but I’m thrilled yeah. And I know can jump higher than 1.90. But all my team-mates inspired me, as the last one on, and I definitely took inspiration from the girls in the relay. I didn’t even know I had a medal, I was just jumping for myself, but I’ll take the silver medal. Who knows where this will go, we’ll see.”

Only Karyna Taranda from Belarus jumped higher, winning gold via her clearance of 1.92m at the second attempt, also a national Under-20 record, after Lecky had missed her three attempts. Maria Murillo from Colombia also cleared a best of 1.90m, a South American Under-20 record, but on her second attempt, which gave Lecky sole possession of the silver, much to her obvious delight.

Lecky had come to Tampere with plenty of good credentials, beating the Rio Olympic silver medallist Mirela Demireva from Belgium in an indoor competition in February – but still few expected this. Her coach Niall Wilksonson also made the trip to Tampere to be close to the Castlederg athlete, Lecky’s silver medal a considerable boost to the Finn Valley club which has done great service to athletics in Donegal.

It followed the silver-winning relay quartet of Molly Scott, Gina Akpe-Moses, Ciara Neville and Patience Jumbo-Gula – also running an Irish junior record of 43.90 seconds on Saturday, losing only to the top-ranked Germans, who took gold in 43.82 having also come through as the fastest qualifiers.

The Irish ran with super confidence too, despite their own medal expectations: “Yeah, over the years we’ve have our disappointments,” said Scott, who just two hours earlier ran in her semi-final of the 100m hurdles, finishing eighth. It was a naturally tense and exciting race, the last changeover between Neville and Jumbo-Gula possibly not as smooth as they would like, but the Dundalk schoolgirl still charged home to secure silver, with the British quartet settling for bronze in 44.05, a season best.

Rhasidat Adeleke sat out the final with a tight hamstring, having run the third leg when the Irish quartet won their semi-final on Friday evening, but Neville stepped up to the mark perfectly, having run 11.54 earlier in the week when making the semi-finals of the 100m.

All four were justifiably delighted by the performance, the national record a nice bonus prize for their silver medals.

All four represent the future of Irish athletes in every sense: Scott running with the St Laurence O’Toole club in Carlow, Apke-Moses now based in Birmingham but still running with her Dundalk club Blackrock-Louth, Neville running with Emerald club in Limerick, and Jumbo-Gula representing St Gerard’s Dundalk.

The championships come loaded in quality and quantity, but with no guarantees either. Jamaica may have won women’s individual 100m gold, but failed to make to the final, as did the defending relay Americans, who ended up disqualified in their semi-final after dropping the baton. Akpe-Moses had also made the 100m final.

So Lecky’s silver brings to six the number of medals Irish athletes have won in the youth and junior championships – adding to the three European Under-18 gold medals won last weekend in Hungary with Sarah Healy’s distance running double, Adeleke’s gold in the 200m, and Sophie O’Sullivan’s silver in the 800m. Rarely has the future looked so bright.