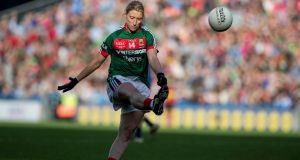 Cora Staunton is among a number of Mayo players to depart the squad. Photograph: Inpho

The Mayo Ladies senior football squad has been rocked by the departure of approximately 10 players from the panel ahead of their All-Ireland SFC qualifier clash with Cavan next Saturday.

Among the players who have withdrawn from the squad are team captain Sarah Tierney, vice-captain Fiona McHale and all-time leading scorer Cora Staunton.

It is understood that the players who have left the squad are citing player welfare issues as the reason behind their decision.

Team manager Peter Leahy was unwilling to comment as were a number of the players when contacted.

However, Mayo Ladies GAA board PRO, Susan Rodgers, did confirm that players had left the squad in the last week.

“Mayo Ladies County Board can confirm that a number of players have departed the county panel. Preparations are ongoing for Saturday’s All-Ireland qualifier against Cavan and we will not be making any further comment until that game is over,” she said.

Officials from the board met with the group of approximately 10 players on Sunday last, and also held a separate meeting with the senior team management.

Last Tuesday a number of players met with Leahy to inform him of their decision to leave the panel. Mayo trained last Thursday without this group. They did not train at the weekend due to club championship games in the county.