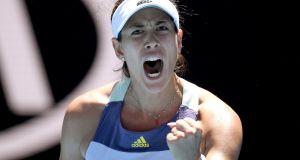 Garbine Muguruza kept believing that she could be a grand slam contender again and the Spaniard is only two wins away from a third title after reaching the semi-finals of the Australian Open.

Muguruza was tipped to dominate the women’s game after winning the French Open title in 2016 aged 22 and Wimbledon the following summer but she is unseeded at this tournament having dropped outside the top 30.

Last season she won only six matches across the four slams, and the omens were not good when she arrived in Melbourne struggling with illness and lost her opening set of the tournament 6-0 to American Shelby Rogers.

From there, Muguruza has been inspired and she won a battle of the big hitters 7-5 6-3 against Russian Anastasia Pavlyuchenkova, who has now lost all six of her slam quarter-finals.

Muguruza said: “I think the toughest moment is when you work hard, work like before, or even harder, and you don’t feel like results are coming fast. Athletes sometimes can get a little bit desperate, get too impatient about it.

“It’s very tough to be for so many years in the top of the game, being that consistent. I feel like it’s something super hard to do. Barely few players can hold that for many, many years in a row.

“You just have to be patient and go through the rough moments, just hang in there and it will come back again.”

A twist to her contest against Pavlyuchenkova saw Muguruza face her long-time coach Sam Sumyk, but it was the Spaniard who had the last laugh.

She has teamed up again with Conchita Martinez, who led her to the Wimbledon title in a temporary arrangement, and it certainly appears a productive partnership.

Muguruza has so many obvious attributes that it is never really a surprise to see her in the latter stages of big events, and she is a proven performer when it really counts.

“I think once you have done it, it definitely gives you a certain confidence that you can handle two weeks’ competition, grand slam, playing many matches,” said the 26-year-old.

“Not a lot of people can say that they have done it. In my case, I know it’s where I feel the most motivated. I just don’t think too much about it. I’m just happy to be here, excited to see how far I can go.”

In the last four, Muguruza will face an in-form Simona Halep, who is the only player left in singles yet to drop a set.

“Perfection doesn’t exist, but I’m very happy with the way I played,” said Halep. “I felt great on court. I was moving great. I felt the ball really, really good. It was a great match.”

Like Muguruza, Halep has won the French Open and Wimbledon, although her titles came more recently.

After putting three slam final defeats behind her, Halep finally got her hands on a trophy in Paris in 2018 and followed that up with a stunning performance to win Wimbledon last summer, defeating Serena Williams 6-2 6-2.

The 28-year-old believes her form in Melbourne, where she lost in the 2018 final to Caroline Wozniacki, is just as good, and her title-winning credentials give her extra belief.

“I just feel more confident and I feel like I’m able to do it. It’s just a feeling that you don’t see this trophy is impossible anymore. This is what I’m feeling about the grand slams now.”