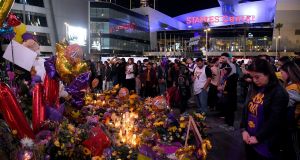 There’s a thing that American schoolchildren do. And have done for a long time. Whenever they hurl an empty juice box towards the trash can or fire something across the room to a pal, they make as if to be palming off a free throw and shout the word “Kobe”.

Doesn’t matter if they ever picked up a basketball, laced up a pair of his signature Nikes to go on the court or even saw him play a game, they all do it. As a matter of a course. An almost involuntary action. The sports icon as socio-cultural tic.

These kids may not all even grasp its significance yet but, for them, Kobe Bryant’s passing will be their death of Elvis, their JFK, albeit a tragedy uniquely experienced through the 21st century prism of 24-hour news voyeurism and the social media grief grinder.

Decades from now they will recall a January Sunday when a country stopped in its tracks, parents morbidly transfixed by images of smoking wreckage on a mountain in Calabasas, reeling at the news his 13-year-old daughter Gianna was one of the other eight who died in the crash.

The elongated nature of the NBA’s 82-game regular season meant Bryant was on America’s television screens nearly every night for 20 years, and his swashbuckling style and record-breaking scoring feats ensured he was name-checked in umpteen songs by everybody from Kanye West to Kendrick Lamar to Beyonce.

Impacting way beyond the margins of sport, whether they knew him as a sharpshooter or as a brand of shoes (right back to Adidas KB8s all those years ago), here was one of those public figures people believed they were on first name terms with.

That was the case regardless of how individuals felt about him and, as perhaps too few have pointed out this past week, he had always been a divisive figure.

A cocky teenage phenom when he entered the league straight from high school, he became the player many fans loved to hate most, because, among other reasons, he was the one who put the dagger through their own team’s hearts on nights when it mattered most.

In that respect he managed the rarest of feats in sport, living up to the advance hype about being the heir apparent to Michael Jordan as the face of the NBA.

Shrugging off the pressure of that billing, the man who led the Los Angeles Lakers to five titles styled himself as “Black Mamba”, a nickname inspired by a deadly assassin from the movie Kill Bill, a moniker designed to capture his ruthlessness and his utter disdain for the naysayers.

Yet in retirement the competitive beast morphed into something much more soft focus, an uber-sports parent, a man of means using a helicopter to circumvent the notorious Los Angeles traffic in order to make sure he could get to as many of his children’s events as possible.

An especially devoted father of four girls, he evolved into an unlikely yet sincere champion of women’s sports, always aware of how the power of his celebrity could impact on coverage.

One minute, turning up on the field to support America’s all-conquering soccer team (a childhood spent in Italy gave him a lifelong love of the beautiful game), the next becoming a mentor and friend to Sabrina Ionescu, the University of Oregon point guard reckoned by many to be the best female talent in a generation.

The nature of that remarkable transformation in his second act, as much as the unspeakably horrific circumstances of his death, meant many recoiled at perfectly legitimate attempts by some media to offer a full-colour portrait of his life over the past few days, one that included the broad strokes of a Colorado rape case from 2003. That episode is as much a part of his story as the 81-point game or all those nights when he shot the lights out. It happened. It was real. And it was so incredibly ugly that to ignore it is just plain wrong.

Remember, the “Black Mamba” calling card was something he came up with as he sought to remake his public persona after a case the conduct of which was troubling then and remains troubling now.

Three times his 19-year-old accuser’s name was leaked to the media, as were interview transcripts with police and intimate details about her personal life. The impression was of a small-town district attorney out of his depth trying to prosecute one of the world’s most famous athletes backed by a high-priced legal team commensurate with a man who died with an estimated net worth of $800 million.

It’s acknowledged the hotel employee refused to testify a week before they were due in court because she lost faith in the prosecution team and had already been so very publicly victim-shamed. Not to mention Bryant settled the civil case out of court for a sum believed to be around $2.5 million. To put that sum in perspective, he bought his wife Vanessa a $4 million ring as a gesture of apology when the story first broke.

All of this is a matter of record, and it is why, long before the events of last weekend, all his subsequent magnificence on the court and self-improvement off it should never have caused so many to want to conveniently forget the disturbing details of what happened. They are part of his legacy. Too.