Disagreements over work and methods of Irish Cruiser Racing Association 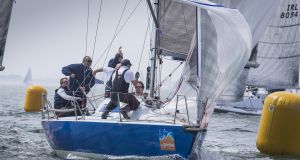 The stalemate at the Irish Cruiser Racing Association impacts on the more than 7,000 regular competitors around Ireland each year. Photograph: David Branigan/Oceansport

A stalemate of sorts has emerged in the saga of the Irish Cruiser Racing Association (ICRA) that impacts on the more than 7,000 regular competitors around Ireland each year.

Disagreements have emerged about the work and organisation of ICRA resulting in a stand-off about how the volunteer-led body should evolve and manage itself. Relationships have become fraught, but there remains some optimism that a solution is not far off.

The ICRA started 15 years ago when a group of Cork and Dublin sailors recognised the need for national representation for boat-owners. The top priority was forming a team for the biennial Commodores’ Cup in Cowes, and also the merging of all the cruiser class championships into a single event.

The latter was instantly popular, with mostly successful events staged at rotating venues around the coast, often with over 100 boats taking part.

Under team captain Anthony O’Leary, Ireland won the Commodores’ Cup on two occasions, both arguably the country’s most successful outings to the bastion of yachting.

Other opportunities have been mooted such as a crew training scheme and a revamp of ECHO, the home-grown national handicapping scheme that is often held up internationally as a successful model. Roll-out of both schemes indicated positive results but a big push appears to have faltered.

Both Barry Rose of the Royal Cork Yacht Club and Fintan Cairns of the Royal Irish YC in Dún Laoghaire, both original founders of the organisation, espoused a leadership style based more on friendship and trust rather than a complicated and bureaucratic structure. And it worked and was popular with the ICRA grassroots.

However, a natural end to the Rose/Cairns era saw both step down from the organisation over a year ago, and with them the years of “corporate knowledge” that then left created a vacuum of sorts.

Filling their shoes was a task led by current commodore Simon McGibney of Foynes YC. Aside from the fact that their successor did not hail from the traditional Cork/Dublin axis that dominated the sport of sailing in Ireland for more than half a century, McGibney’s appointment heralded a new, more youthful era.

If anything the internal wranglings of the organisation are far from a simple power-struggle; anything but. It’s more of a transition phase, arguably from ICRA version 1.0 to version 2.0, an update of the firmware.

This could be seen in the outcome of a recent ICRA symposium held two weeks ago to address the future direction of the organisation. Although relationships became fraught in the aftermath of the gathering, the work carried out was substantial and worthwhile.

A number of headline items for the organisation to address emerged from the eight-hour symposium, including that ICRA had a number of governance issues to address. Communications shortcomings were also highlighted. The fragmented way that the cruiser segment of the sport is represented was also identified as an issue.

This latter point refers to the structure that has ICRA and half a dozen similar regional bodies around the coast each trying to achieve similar outcomes for the same end-users.

If the current angst is to have a positive and meaningful outcome, unlocking the potential of a sport that has so much to offer, it may yet be achieved by a merger and pooling of resources, experience and, above all, people.

1 Tipping Point: Eddie Jones’s rhetoric is out of place in a febrile political climate
2 Jürgen Klopp wants Liverpool to show they are contenders
3 Maguire and Martial head Manchester United past Chelsea
4 Eddie Jones continues to revel in putting rugby’s nose out of joint
5 Robin McBryde: Farrell will be judged on results, not style
Real news has value SUBSCRIBE