Dave Hannigan: The City of brotherly love quickly descends to hate when it comes to sports 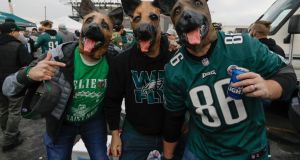 At one point during the WWE Royal Rumble at the Wells Fargo Centre in Philadelphia last Sunday night, the natives broke into a long and sustained chant of “F**k Tom Brady!” One week before their beloved Eagles face down the New England Patriots talismanic quarterback at Super Bowl LII in Minneapolis, thousands of men, women and children were united in foul-mouthed song. Nobody who knows the city of brotherly love and its peculiarly deranged sporting brethren would have expected any less profane or abusive a chorus.

Half a century has passed since the Eagles fans carved a notorious reputation for themselves on a bitter winter’s day at the old Franklin Field. That was the December afternoon they booed Santa Claus during a half-time appearance, battering him with snowballs in an apparent attempt to vent about yet another losing season. While locals have always felt unfairly tarnished by that one rather embarrassing cameo, and like to point out that the 18-year-old in the red suit was one of their own larking about, there is plenty recent, equally damning evidence too.

Just two weekends, ago, some of the the latest generation to bleed green disgraced themselves at the NFC Championship game against the Minnesota Vikings. Aside from those caught sucker punching and bottling Vikings fans for having the temerity to turn up, one gentleman was arrested at the tailgate for punching a police horse. What made that incident all the more remarkable is that it was the second time in the current playoff run that an Eagles die-hard ended up in custody following fisticuffs with a trusty steed. One man impersonating Mongo from Blazing Saddles is an isolated incident, two represents a pattern of behaviour.

Shortly before that match began somebody posted photographs of Philadelphia cops slapping grease on the poles of street lamps in the hope of preventing over-exuberant supporters clambering up them in the event of an Eagles victory. After they won, all the slathering counted for naught. Intrepid celebrants still managed to shimmy up the slick poles from where they could see Christmas trees being set on fire in the street, a car driving up the Rocky steps at the city’s Museum of Arts, and a gaggle of drunkards belting out the theme to Fresh Prince of Bel Air.

“Philly is home,” wrote John Gonzalez in an essay on the town’s unique sporting culture. “It’s a terrific city. A vastly-underrated city. The best city. The problem is Philadelphians. Not all of them but enough of them to create an image in the national imagination. Something on the order of abrasive boozed-up barbarians. Abrasive boozed-up barbarians who love Rocky. And have a jail in their football stadium. That is the reputation. And that reputation is not wholly unearned.”

Natives chafe at the stereotype but the weight of history is against them. In the 1990s, the atmosphere at Eagles games became so tinged with casual violence that the club constructed a courthouse and a jail in the basement of their then-home, Veterans Stadium. Later, the municipal judge who sat there pointed out most of the perps brought to his bench were from outside Philly but by then the die was cast. There is no coming back from headlines advertising a stadium with an in-house judicial system and cells.

Were such measures necessary? Well, these were the bowsies who cheered lustily when the Dallas Cowboys’ Michael Irvin suffering a career-ending neck injury in 1999. As he lay there completely motionless for 20 minutes, awaiting evacuation to a spinal-cord trauma unit, they couldn’t help giving him both barrels even when the stretcher came out.

“This, in terms of bad taste, was as bad as it gets,” said Ed Rendell, the city’s then mayor. “I think too many of our fans have gotten caught up in our image of bombarding people and booing.”

The boorish carry-on isn’t the preserve of the city’s gridiron fans either. Their baseball counterparts once flung batteries at JD Drew to punish him for refusing to sign with them as a youngster. In another particularly Philadelphian encounter, an argument between an off-duty cop and some drunken twenty-somethings ended with one of the younger Philly fans sticking his fingers down his throat and deliberately projectile vomiting over the man’s 11-year-old daughter.

Then there’s the NHL. When the Philadelphia Flyers’ were being embarrassed by the Washington Capitals in a playoff two years ago, irate supporters showered the ice with complementary light-up bracelets that they had been given to honour the team’s recently deceased owner. After the PA announcer pleaded with them to stop, they rained down a fresh barrage and cost the side a delay of game penalty, their petulance actually interfering with play.

In the film of Matthew Quick’s novel, Silver Linings Playbook, Robert De Niro plays Pat Solitano snr, a diehard fan whose Sundays revolve around the NFL. In one scene, he’s dropping his son and namesake to the tailgate before an Eagles’ game against the New York Giants. Battling anger issues, Pat jnr (Bradley Cooper) has recently exited a psychiatric facility and is concerned about keeping his cool in such a highly-charged environment.

“Don’t drink too much,” says his father. “Don’t hit anybody, you’ll be fine.”

The advice comes from a man who is banned from the venue for beating up Dallas Cowboys fans back in the day. The Eagles’ way.