€10.8 million will be distributed between Ireland’s 57 National Governing Bodies 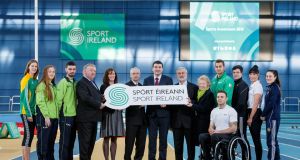 None of the record tax revenues or economic returns from the lowest unemployment levels since the crash have yet found their way into the funding for Irish sport - at least not the high performance end.

Sport Ireland, understandably cautious not to sound ungrateful to the Government, have dressed up their 2018 funding allocation to the various National Governing Bodies (NGBs) as effectively similar to last year: on closer inspection there is actually a drop off, while select allocations, such as the Women in Sport Programme, remain unchanged for the third successive year.

A total €20.7 million is being distributed, just over half of which, €10.802m, goes on core funding for the 57 NGBs, excluding the big three - the GAA, FAI and IRFU (who receive separate funding for participation programmes); this is slightly down on the 2017 amount of €10.860m, although there are some mitigating cases, as neither Weightlifting Ireland nor the Irish American Football Association received any funding for 2018.

Another €7.0m goes to the high performance programmes of 21 NGB’s, primarily the Olympic sports, also slightly down on the 2017 amount of €7.215m: again there are mitigating cases, as Pentathlon Ireland has had its funding withheld “pending the resolving of some issues”: last year the sport received €260,000 in high performance funding.

There are some straight-up cuts: Athletics Ireland has had its high performance funding reduced from €835,000 to €790,000 - although it is still the best supported of all NGBs on that front. High performance funding for Cycling Ireland is up from €325,000 to €390,000, although that is partly accountable by a transfer in funds from direct athlete investment.

Last year, Irish boxing took a major hit for failing to reach its Rio Olympic targets, the Association’s high performance funding cut from €900,000 to €700,000, dropping it behind both athletics and sailing. That €700,000 remains unchanged for 2018.

Around €1.9m of the €20.7m will be announced later this month in direct athlete investment, again effectively similar to last year. Funding for The Women in Sport Programme, introduced in 2005 to support women’s participation levels and their roles within sporting organisations, remains unchanged at €600,000 for the third successive year, despite evidence of its successful impact, and rates inflation, etc

Minister of State for Tourism and Sport, Brendan Griffin TD, commented on the overall allocations and while admitting there was always room for an increase, pointed to the lack of any major cuts: “At least we’re not cutting budgets anymore, which is positive,” said Griffin, speaking at the National Sports Campus at Abbotstown. “I would like to see an increase of course and in the most recent budget, we did really well on the capital side and the current side.

“I’ll be the first to say is disappointing we weren’t able to increase it, but there was a huge increase in the sports capital programme throughout the country which is a huge benefit to a lot of the NGBs and their affiliated organisations. There was €50-60m spent on that recently, plus another €4m on the regional programme, which benefitted 1,700 clubs. There is more than one way or avenue to get money into the sporting organisations.

“Within Government there’s huge competing demands. We’ve a health crisis that needs to be resolved. And a housing crisis everyone is aware of. There’s an infrastructural deficit across the country in general after a decade of underinvestment. These are the realities we’re faced with and when I go to Pascal Donohue asking for more money, and I think we did relatively well overall, and hopefully we can build on that next year.”

Griffin also to the pointed to the €26m in funding for phase two of the National Sports Campus (which provides for indoor soccer, rugby and GAA pitches), and also the funding set aside for the completion of the velodrome.

Exchequer returns show that the State collected €58.376 billion last year, and spent €56.47 billion, leaving it with a €1.9 billion surplus.

John Treacy, CEO of Sport Ireland, described this core funding as the “lifeblood” of sport: “To a large degree, we’ve protected these NGB’s from a lot of the cuts down through the years,” said Treacy. “That piece is really important.

“We will continue to make the case for capital money for the NGB’s. That’s something, leading into Tokyo 2020, that’ll be critically important. The capital programme leading into Rio was very fruitful for certain sports in terms of medals. We’ll continue to make the case to government this year because Tokyo will be expensive and we’ll have training camps and we’ll need an injection of funds for that.”

The Government has already agreed to restore full funding to the Olympic Council of Ireland (OCI), which had been suspended in the aftermath of the Rio ticketing controversy; however that 2018 allocation has yet to be agreed.

There also a one-off allocation of €380,000 to assist in the hosting of five sporting events this year, including €110,000 to Horse Sport Ireland for World Equestrian Games, and €100,000 to the Confederation of Golf in Ireland for the World Amateur Team Golf Championships.

Total Government funding for sport, excluding the capital grants, is around €56m, including the FAI, GAA and IRFU allocations, anti-doping, the Institute of Sport, etc, some 11 per cent of which goes to Sport Ireland on cost overheads.