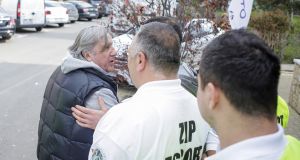 Romania head coach Ilie Nastase is escorted from the arena by stewards during the Fed Cup match between Romania and Britain on Saturday. Photograph: George Calin/Inquam Photos via Reuters

Ilie Nastase has been handed a provisional suspension from the Fed Cup by the International Tennis Federation (ITF) – but that did not stop him brazenly walking back into Tenis Club IDU in Constanta on Sunday.

The Romania captain was thrown out of the World Group II play-off against Britain on Saturday after an extraordinary meltdown that saw him hurl foul-mouthed abuse at the British team and journalists.

He had his accreditation removed but, shortly after the home side had wrapped up victory in the tie, Nastase walked in through the main doors and along a corridor to the VIP lounge.

The ITF later confirmed Nastase was not allowed to be on site in any capacity and the Romanian Tennis Federation president subsequently said he had left.

An ITF statement read: “The ITF’s Internal Adjudication Panel has issued Ilie Nastase with a provisional suspension under the Fed Cup regulations for a breach of the Fed Cup welfare policy at the tie in Constanta.

“Under the terms of the provisional suspension, Nastase may not participate in the Fed Cup in any capacity with immediate effect and shall be denied access to, and accreditation for, any ITF event including Fed Cup.

Nastase was already under investigation by the ITF after making an apparently racist comment about Serena Williams’s unborn baby at Friday’s press conference and asking British captain Anne Keothavong for her room number.

Former US Open finalist Pam Shriver, meanwhile, has revealed that Nastase made inappropriate comments to her when she was a teenager on the WTA Tour.

The 54-year-old told BBC Radio 5 live’s Sportsweek programme that Nastase often asked her if she was a virgin.

“Whenever I saw him at any tournament he would ask me the same question,” she said. “This man has not been respectful of women for a long, long time.”

“When I got older, perhaps 20, and he asked me for about the 30th time, I said, ‘would you please stop asking me that?’,” said Shriver.

“Sort of to his credit, he never asked me again. I set a firm boundary and he stopped.”

On Saturday, with Johanna Konta leading Sorana Cirstea 6-2 1-2 in the second rubber of the tie, Nastase became embroiled in a row after Keothavong complained about noise from the crowd.

The 70-year-old former world number one was heard to say to umpire Jaume Campistol: “What’s your f***ing problem?” He then called Keothavong and Konta “f***ing bitches”.

Nastase was sent off the court by tie referee Andreas Egli, who he called a “f***ing a***hole”, and was eventually escorted out of the venue by security.

Shriver thinks Nastase’s coaching career is over, saying: “You want the punishment to match the crime and he behaved really badly.

“I think it has all gone too far, I think it is over now. I think he is done as a coach, certainly in any formal setting.

“Everybody has a couple of different sides to their personality and certainly not all of Ilie Nastase is evil and mean and sexist. But unfortunately he does have a filter and there is a side that is, so he can’t coach women players any more.”