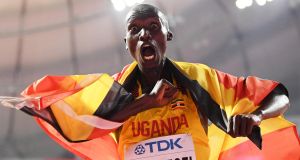 Sebastian Coe, the president of World Athletics, has dismissed concerns that Nike’s controversial new track spikes, which have produced a spate of recent world records, could provide an unfair advantage at the Olympics.

Lord Coe said he was “pretty calm” about the game-changing spikes and did not want to “stifle innovation” despite Joshua Cheptegei and Letesenbet Gidey breaking the men’s 10,000m and the women’s 5,000m records within an hour of each other in October. Both were wearing Nike ZoomX Dragonfly spikes, billed as the “fastest shoes ever”.

With Mo Farah and Sifan Hassan also breaking the men’s and women’s one-hour records wearing new Nike shoes in Brussels in September, there have been suggestions that the company could enjoy a similar dominance on the track as it did in the marathon between 2016 and 2019, with other brands potentially taking years to catch up.

However, Coe said he was confident that history would not repeat itself. “I’m not sitting in fear of that,” he added, stressing that it was a good thing for shoe manufacturers to try to outdo each other.

“I remember a period in the mid-2000s where Adidas were the kings of the podium, particularly in distance,” he said. “So these things come in cycles. And there is a built-in dynamic where shoe companies mercifully are still investing a lot of money into the research and development of shoes. And I’m pleased they’re doing that.”

Last year World Athletics introduced new rules for track spikes, limiting the use of plates and restricting the sole to be no thicker 30mm. However, Coe said the organisation also had a system that could “permanently review these spikes” if they were proved to be unfair. Coe also denied that the succession of world records on the road in recent years - including, most recently, four men running inside the half-marathon best in November - was undermining the sport.

“I don’t think we’ve reached that point where world records are being handed out like confetti,” he insisted. “And if I go back to the 1930s I still marvel at Rudolf Harbig who ran 1:46 and bits for 800m on a cinder track. And I still marvel at Peter Snell, who ran world records and some significantly sub-1:45s on grass tracks. Meanwhile Derek Clayton ran a world marathon record [2:09:36]in shoes that you wouldn’t have gone for a stroll with in your local park.

“At the moment I’m pretty calm about this. And the balance of judgment here is always - and I guess this is a personal instinct of mine as well - that we shouldn’t be in the business of trying to suffocate innovation.” – Guardian