TV View: With the Masters, F1, All-Ireland clashes and more it was difficult to keep pace 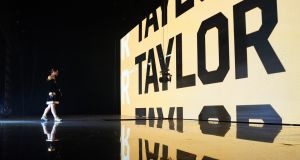 Katie Taylor makes her way to the ring for her clash with Miriam Gutierrez. Photograph: Inpho/Matchroom/Dave Thompson

All that talk about whether Christmas would be cancelled and in the end, for sport-a-philes at least, it came early - and lasted a whole two days. The problem, though, was there were so many pressies under the tree you wouldn’t have known where to start with your unwrapping. The only thing that was missing was a supply of batteries for the over-worked remote control.

An avalanche of sport, then, only Homes Under The Hammer offering respite to sport-a-phobes at one stage on Saturday. For more normal people, though, it was pure bliss, if a little challenging. Hallucinatory, even. Like when you started seeing Aimee Mackin sink an eight foot putt to take pole position from Dustin Johnson who had to settle for a place in the hurling quarter-finals where he will face Lewis Hamilton in Clones, the winner set to meet Katie Taylor who is favourite to take the Green Jacket.

Until she’s presented with it in the Butler Cabin, though, Katie will have to make do with all those world title belts, which she retained by beating Miriam Gutierrez at Wembley Arena on Saturday night.

By now, nothing should feel weird any more, after the year we’ve all endured, but Sky’s regular visits during the night to boxing pioneer Jane Couch’s living room where she was watching the bouts from, well, her couch, were a little odd, especially when her dog Ronnie climbed up on the couch, turned his back on the camera which then found itself fully focussed on the hole in his bottom.

Before Ronnie’s bottom got to see the three female contests that were topping the bill, some lads were fighting too, although Kash Farooq v Angel Aviles clashed with The Masters v Kilkenny v Galway v Portugal v France, so that was a non-runner. But we were back in time to see Jack Cullen shout “BAH! BAH!” every time he threw a punch at John Docherty, not a sinner in the place to drown out the cries, so next time you complain about Maria Sharapova’s grunts you’ll be sent a recording of Jack’s bahs.

Docherty should have been irked enough to deck Jack, but he lost on points in the end to a man with the finest nickname in world sport - he’s from Little Lever in Bolton, so, naturally, he’s called ‘Little Lever’s Meat Cleaver’. No wonder Docherty tried to keep his distance. Wouldn’t you?

Katie time, and while she introduced herself to her opponent, Sky tried to make up for the absence of a crowd by playing the kind of soundtrack that you usually only hear on Masterchef when the contestants have just 30 seconds left to get their soufflés out of the oven. Sort of ominously foreboding.

Mind you, the lack of crowd noise has the effect of giving you the notion that being a boxer can be quite exhausting and, betimes, painful, the amplified grunts and groans, and hyperventilating between rounds, de-sanitising it all just a bit. It was Gutierrez who did the bulk of the grunting and groaning, Taylor on top from the off. Job done.

Mickey Harte’s Tyrone job is done too, but while most of those who manage their counties for 18 years take a few months off before moving in to the punditry world, it took just 24 hours before he turned up on BBC Northern Ireland with a mic in his hand, alongside Peter Canavan and Oisin McConville, for the Cavan v Down game.

“As if it wasn’t a bad enough weekend for Armagh, you put me beside these two, so I’m reliving all the nightmares of the noughties again,” said poor Oisin.

Mark Sidebottom asked Mickey if the criticism through the years ever bothered him, Mickey’s eyes narrowing as only Mickey’s can. “God help those people who criticised me so much . . . on the social media and stuff . . . sorry folks, I didn’t read it because I don’t go there, thanks to be to God I’m not in to that business at all.”

Would he manage another county? “I love Gaelic Games, I’ll put it like that,” he smiled, “I’ll not be putting on the slippers just yet.”