Maguire’s Mykonos misadventure puts ‘other news’ in the shade 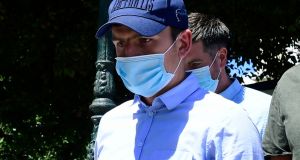 When, come the year’s end, we’re all asked to pick our sporting moment of 2020, it’s going to be mighty hard to resist going for that evening when the lead item on the BBC news was a chat with Harry Maguire about how his Greek holiday was banjaxed. Harry even managed to relegate a pandemic and an approaching hurricane that had been classed as “unsurvivable” to the “other news” section.

Name one time Virgil can Dijk ever managed to do that.

It was sort of sport’s version of Martin Bashir’s interview with princess Diana, Harry doing that tilty-headed, doe-eyed thingie when describing how sad he was about what had happened in Mykonos. “There were three people in that cell,” was all he needed to say, really, and the analogy would have been perfect.

In fairness to the BBC’s Dan Roan, who’s been getting dog’s abuse since the chat, mainly from people with Liver birds as their profile pics, he did chuck one or two tricky questions Harry’s way, but he was no Sarah McInerney.

Whatever the truth, though, about that night’s shemozzle, no one really believes that Harry said to the Greek police, “Do you know who I am?” largely because they might have replied: “Yeah, the bloke who cost £5 million more than Virgil van Dijk, lol.”

But the thrust of that wing that is unconditionally supporting Harry through this ordeal, as though he’s the Mandela of our time, is that he has been the victim of lawless, swarthy Mediterraneans who should be grateful that the likes of him and his mates holiday there, otherwise they’d just be a banana republic with loads of olives. This wing has stopped just short of asking Premier League footballers to take the knee while wearing “Harry’s Life Matters” T-shirts.

Sadly, neither the players of Arsenal nor Liverpool showed any such solidarity during Saturday’s Community Shield, instead just blithely kick-starting the new season a wet week after the last one was done, ignoring Harry’s predicament.

Arsenal won on penalties, celebrating as if they’d collected their 17th Champions League trophy in a row. BT’s Jake Humphrey wondered, in so many words, if this marked the decline of the Klopp empire – forgetting, perhaps, that they also lost the 2019 Community Shield 4-5 on penalties before going on to win the Premier League by 976 points.

As for Arsenal, “Mikel Arteta is second in terms of win percentage as Arsenal boss, only behind Arsène Wenger!” Martin Keown was far too polite to say “F***ing hell, Jake, Wenger was in charge for 1,235 games; Arteta’s hardly had that many minutes.”

‘Nothing you can do, a total eclipse of the darts,’ said Sid. ‘Bonnie Taylor!’ added Fry

Pierre-Emerick Aubameyang, meanwhile, scored his 1,235th goal for Arsenal, or thereabouts, this one almost as lovely as the eternally big smiley head on the fella. If Sid Waddell had been commentating he’d no doubt have declared: “He could hit the dandruff on a fly’s forelock, this man.”

Which is what he said of Phil Taylor during the 2010 Darts Premier League semi-finals when, quite magnificently, he had Stephen Fry alongside him in the commentary box.

Sky’s “A Little Bit of Fry and Waddell” reminded us of the glorious occasion, not least Fry’s response to the master’s “fly’s forelock” utterance and his excitement at being alongside him in the booth: “Ah, Sid Waddell, I’m like a pig in Chardonnay.”

It was a one-off teaming-up of the pair, Fry invited along because he’s not only the loveliest man on planet Earth, he’s also a darts diehard – something his toff-ish mates just can’t understand, believing, as they do, that only folk who earn below the average industrial wage actually like the sport. “People say ‘you cannot like darts, it’s so not you’,” he chuckled.

But he adores it. And Taylor was his God, Fry regarding him as the greatest-ever English sportsman. With Waddell at his side, he watched him obliterate Mervyn King in those semi-finals. “Nothing you can do, a total eclipse of the darts,” said Sid. “Bonnie Taylor!” added Fry. Sid dissolved and doffed his cap in Stephen’s direction.

Like most of us, Fry still mourns Waddell’s passing. “He understood the mystery of sport better than anyone, he could read it like a Talmudic scholar can read Hebrew, with absolute confidence and conviction.”

The mother, father, auntie and uncle of all tributes, Spot-on, too.