Ian O’Riordan: Nike don’t just do sporting endeavour; they do it their way

After Salazar’s ban, eyebrows will be raised at Kipchoge bid for staged sub-two hour marathon 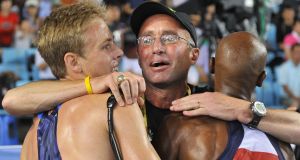 Coach Alberto Salazar with two of the Nike Oregon Project’s ‘stable’ runners, US athlete Galen Rupp and Britain’s Mo Farah. Salazar has been slapped with a four-year ban for doping. Photograph: Jung Yeon-je/AFP/Getty

Now is probably not a great time to be promoting any sporting endeavour which openly intends to flout the rules in the quest for those critical marginal gains. It’s hard enough trying to figure out the grey area without putting it all out there in black and white.

Such as trying to run the marathon in under two hours: it doesn’t matter how it’s measured – 26.2 miles, 42.1km, around 138,000 feet – no man has ever run the classic distance in under two hours. Only next weekend, in the latest publicity stunt to help market Nike running shoes and put petrochemical giant Ineos through another sports wash, Eliud Kipchoge from Kenya will again try to crack that great barrier.

And it is the last great barrier of athletics – if not sport itself. Along with the sub-four minute mile, and later the 10 second barrier for 100 metres, it also represents a sort of Everest of human endeavour, only one yet to be conquered.

Two years ago Nike put on a similar stunt with their Breaking-2 Project, staged around the Monza racing track in Italy. Using every possible ‘legal’ advantage and ignoring most of the IAAF’s criteria on where and how marathon world records can be broken, Kipchoge ran a very impressive 2:00:25, also wearing a prototype of the Nike Zoom Vaporfly 4%, which promised to improve running efficiency by roughly that percentage.

Nike have already sold a lot of very expensive running shoes on the back of that, and are now branding the even more expensive Nike ZoomX Vaporfly Next% for the no-discount price of €275; still very small change for a company now worth $29.5 billion.

This time it’s been dubbed the INEOS 1:59 Challenge, given its joint-backer is Jim Ratcliffe, the chairman of Ineos and Britain’s richest man, who on last count had a fortune somewhere in the region of €24.5 billion.

Earlier this year, Ineos bought over the grey area of British cycling that is Team Sky, and now it appears Ratcliffe has turned to marathon barriers to help clean up the image of Europe’s third largest producer of polyethylene and polypropylene, the two most common plastic compounds used in packaging and construction, and it also support fracking, the process by which water, sand, and chemicals are pumped underground to trigger disruptions in rock formations that release shale gas – and minor earthquakes.

It’s scheduled for next Saturday only, like all proper publicity stunts, if the weather conditions aren’t perfect they’ll put the thing back until Saturday week. They’ve employed a team of 41 rotating pacemakers, all top Nike-sponsored runners, and Kipchoge will also get to follow a carefully programmed electric car to ensure that pace never wavers, all in open breach of the IAAF rules on road records

Still some of the details have been sketchy, not least how strict they’ve been adhering to the IAAF rules on anti-doping. No one is questioning that Kipchoge can run; this time last year he won the Berlin marathon in a world record of 2:01:39, taking one minute and 18 seconds off the previous record, set in 2004, when fellow Kenyan Dennis Kimetto became the first man to go under 2:03, clocking 2:02:57, also in Berlin.

It’s certainly not impossible, only if Kipchoge does go sub-two, it may only further blur the line between proper sporting endeavour and staged sporting entertainment.

Maybe all sport is heading that anyway, especially coming on the back of some of the events that unfolded at the World Championships in Doha over the last week, and not just on the track and field.

After breaking the credibility around the Nike Oregon Project, it’s easy to see without looking too far that not much is really sacred with that brand. At least not at the Nike headquarters in Beaverton, Oregon.

As reported in the Wall Street Journal, Nike Oregon Project head coach and founder Alberto Salazar frequently briefed top Nike Inc. officials, including chief executive Mark Parker, on his experiments to manipulate the use of performance-enhancing drugs for track and field athletes. That has now resulted in the four-year ban on Salazar (and on his Nike-sponsored doctor, Jeffrey S. Brown) imposed by the US Anti-Doping Agency (Usada).

According to emails referenced in the report, prepared by the American Arbitration Association for Usada, Parker was made aware of Salazar and Dr Brown’s ongoing work in what Usada described as “orchestrating and facilitating prohibited doping conduct”.

The reports also allege that at least one of the pair’s experiments – determining whether the use of topical testosterone cream would trigger a positive doping test – was conducted in a laboratory at Nike’s headquarters. Parker was also included on several emails from Salazar and Dr Brown that detailed the pair’s ongoing research to find performance-enhancing benefits for a stable of Olympic runners at the Nike Oregon Project.

Parker was also kept in the loop, according to emails, on a series of tests being conducted with L-carnitine, to improve aerobic performance, which required infusions far beyond anti-doping rules.

Only since then, according to The New York Times, Parker sent an email to employees on Tuesday insisting that “Nike did not participate in any effort to systematically dope any runners ever; the very idea makes me sick”.

This being the same Nike Inc that stood by Lance Armstrong until he was eventually taken down by Usada, and the company that also re-signed two-time doping offender Justin Gatlin on his return to global sprinting.

All of which is a reminder that when it comes to any sporting endeavour Nike doesn’t just do it, they do it their way.