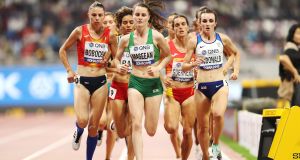 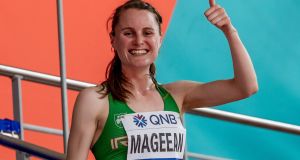 Ireland’s Ciara Mageean after qualifing for the final of the Women’s 1500m at the World Athletics Championships in Doha. Photo: Morgan Treacy/Inpho

Composed, calm, confident, super cool and most of all qualified.

Championship distance races are often won and lost on tactics, and Ciara Mageean delivered a masterclass to make sure of her place in the final of the 1,500 metres on another hot night of athletics in Doha.

With that she also ended the 22-year wait since an Irish woman last made this final, some measure of the achievement and opportunity now open for Mageean in what is clearly one of the most competitive events of these championships.

Only the top five in each of the two semi-finals went through to Saturday’s final (6.55pm Irish time), and crucially Mageean never once allowed herself get outside of those positions. Instead she bossed the race from the front, and after the proverbial crawl for the opening two laps, still battled for the lead as they headed down the backstretch for the last time.

Sifan Hassan did sweep past to take the win in 4:14.69, the Dutch woman looking impossibly easy as she chases a first ever 10,000m-1,500m double, only Mageean also held her form and her line to take the fifth automatic qualifying spot in 4:15.49.

She was in serious company, defending champion Faith Kipyegon from Kenya just ahead of her, fourth in 4:14.98, and everything about Mageean’s race was controlled and mature, the 27-year-old from Portaferry thus closing another little gap on Sonia O’Sullivan, who was that last Irish woman to make this final in Athens back in 1997, finishing eighth, four years after winning silver in the event behind China’s Liu Dong in Stuttgart.

It’s shaping up to a proper blue ribbon event in Doha too: Britain’s Laura Muir came through the second semi-final in third, that one won by the American Jenny Simpson in 4:00.99, significantly quicker given they knew how slow the first race had done. Indeed Britain’s other hope Sarah McDonald, who was jostling hard with Mageean throughout, missed out by one place.

Mageean came to Doha after improving her lifetime best to 4:01.21, clocked in Monaco back in July, and after a similar masterclass in her heat on Wednesday, is now looking to a World Championship final.

“That was the plan,” she said. “You never know in the major championships how these races will go, fast slow or in between. So it was about getting myself in a good competitive position, then think ‘I’ll hold on here’, and finished strong. Training at altitude in St Moritz had gone very well, working on a few strategies, and I feel like I’m in PB shape.”

Mageean endured a very different experience in London two years ago when she was trailed off in her opening heat, but after winning European Indoor bronze over the distance back in March, now becomes that first finalist since O’Sullivan 22 years ago.

Hassan is clearly the athlete to beat, despite the absence of her coach Alberto Salazar, no longer allowed to associate with her after being given a four-year ban on Monday for anti-doping violations, but that 4:01.21 certainly puts Mageean in the mix for Saturday, where tactics will again make for the winning and losing of medals.

Still speaking of firsts, Jakob Ingebrigtsen is back on track to becoming the first European-born athlete to win the men’s World Championship 1,500m since Britain’s Steve Cram took the inaugural title in 1983. Only with some doubt, at first, whether or not he’d have older brother Filip for company this time.

Three days after falling over the line in fifth place in the 5,000m final – and short of becoming the first European-born athlete to win that event since Eamonn Coghlan took the inaugural – the youngest of the Norwegian brothers won his qualifying heat in 3:37.67 about as cool as he ever is. Just turned 19, Ingebrigtsen left some of the big kickers in his wake, George Manangoi from Kenya, brother of defending champion Elijah, failing to qualify from that heat.

Filip, 26, who has already broken some of the East African dominance in the 1,500m by winning bronze in London two years ago, had an anxious time in the second heat. Matthew Ramsden from Australia hit the ground in the first lap, and entering the last lap the middle Ingebrigtsen brother clashed with the Ethiopia Teddese Lemi, punching him in the back, shortly before Lemi hit the ground too, and that killed his hopes of qualifying. That heat was won by the Kenyan Timothy Cheruiyot in 3:36.82, Filip in fourth.

It went to the Track Judges for review, only for now both Ingebrigtsen brothers are through to Friday evening’s semi-finals (6.05pm): Jakob has improved his best time this summer to 3:30.16, and with biggest kick and confidence of all the brothers looks well capable of winning gold in that event.

In a truly extraordinary women’s 400m final, the seemingly unbeatable Shaunae Miller-Uibo from Bahamas ran a brilliant personal best of 48.37, only to surrender to Salwa Eid Naser from Bahrain, who ran an incredible 48.14 to win gold, the third fastest in history. Her best coming to Doha this season was 49.17, although the 21-year-old did win silver in London two years ago.