Irish riders back in action as season end nears 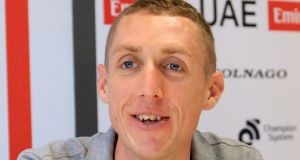 The elite men’s world road championships last Sunday didn’t go to plan for the Irish team, with the cold and wet conditions leading to a huge attrition race among the peloton, including the six Irish riders. However, there are still several more races left this season and competition continues in the coming days.

Dan Martin was one of the first attackers last Sunday but made clear beforehand that the Il Lombardia Classic on Saturday week would be his big target. He won the race back in 2014, and if he can reach prime physical condition in time, has the necessary attributes to win. The pressure is on, however; his last top five result was in the Critérium du Dauphiné in June.

Martin’s build-up to Il Lombardia will see him compete in three other Italian events beforehand. He will contest the Giro dell’Emilia this Saturday, a race he was second in nine years ago, then do the Tre Valli Varesine next Tuesday. He won that race in 2010. His final event before Il Lombardia will be Gran Piemonte on Thursday.

Another rider who was part of the Irish team last Sunday is Conor Dunne. The 2017 national road race champion has a busy programme of one-day races. These include Eurometropole on Saturday, La DH Famenne Ardenne Classic on Sunday, Binche Chimay on Tuesday, Paris-Bourges on Thursday, and Paris-Tours on Sunday week.

Dunne is competing with the Israel Cycling Academy squad, which has acquired the Katusha-Alpecin team’s WorldTour licence and therefore looks set to step up a level in 2020. Martin has been confirmed as moving there, and will be one of the team’s big leaders. It is not yet clear if Dunne will have a place on the squad, but there should be greater clarification in the weeks ahead.

Clarification is also pending for Sam Bennett. He has been part of the Bora-hansgrohe team for several seasons, but while he has been cycling’s best sprinter this season, he was passed over for selection for both the Giro d’Italia and the Tour de France. He is greatly frustrated by that and has been trying to move to the Deceuninck QuickStep squad. However Bora-hansgrohe is resisting, reportedly arguing that he made a verbal agreement to stay with the squad, and so his exit has been complicated.

However, Bennett said recently that he hoped the situation would be resolved soon and that he could then confirm his plans for 2020.

Kevin Walsh and colleagues lifting the lid on football coaching methods 06:00
Tadhg Beirne looking forward to facing some familiar faces against Scarlets 06:00
Marc Ó Sé: David Clifford ‘the key’ to unlocking Dublin 06:00
Rugby Stats: Contrasting preparations by four provinces for start of Pro14 06:00
Dundalk can eye up €4m Europa League bonanza if they see off KI 06:00
Here is your handy guide to sport on television this week