Dan Martin’s Diary: One of the strangest days I’ve witnessed at the Tour 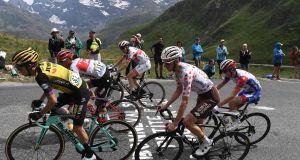 Dan Martin (centre) in action during stage 19 of the Tour de France between Saint-Jean-de-Maurienne and Tignes. Photograph: Jeff Pachoud/AFP/Getty Images 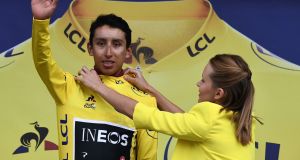 Colombia’s Egan Bernal celebrates after receiving the yellow jersey on the podium after stage 19 of the Tour de France between Saint-Jean-de-Maurienne and Tignes. Photograph: Anne-Christine Poujoulat/AFP/Getty Images

Well, that was one of the strangest days I’ve ever seen at the Tour. Friday’s stage was set to end with a big battle on the climb to Tignes, but instead it all fizzled out long before the finish. We initially had no idea what was happening, had no clue what was going on. We were about one kilometre from the top of the Col d’Iseran, the highest point in this year’s Tour, when we were told the race had been stopped.

My first thought was that there was maybe an electrical storm; I have heard there is a rule in soccer and some other sports that if there is a storm in the region, they stop the game because of safety reasons. That was my initial guess, because I had no idea how extreme the weather had got.

The shower that caused the damage was far away from us when it happened, and that added to the confusion. The hailstones had hit, and we later heard that the road had even been washed away at one point along the course.

Stopping the race was a strange thing, but there was no choice. In those situations everybody expects an argument, with riders and team managers saying ‘why did you do it, why did you do it?’ But I think the organisers had no alternatives at all, because the road was basically blocked.

The decision had a big impact on the race, with the times for the general classification being calculated from the gaps at the top of the Col d’Iseran. Nobody could have predicted that the Colombian Egan Bernal would take yellow like that. It was an unfortunate situation: if everybody knew beforehand that the finish line was at the top of that climb, it could have changed the pattern of the race completely.

I am sure that the rider who had been in yellow, Julian Alaphilippe, would have done a sprint towards the top and perhaps saved another 10 seconds. Or maybe Bernal would have gone even harder on that climb. And it is likely that the other general classification riders would have attacked each other and tried to open up gaps between them. There is no way of knowing how things might have played out.

Now, with just one mountain stage remaining before Sunday’s final stage to Paris, Bernal is in the yellow jersey. He is 48 seconds clear of my former teammate Alaphilippe. Egan has been considered as this incredible talent for a few years now. This climb, the highest in the race, is one where everybody expected him to be strong on and so it turned out. He had a big advantage heading into it, in that he is from Colombia and is used to high altitudes. I heard that he was born at the altitude that the Iseran topped out at, and so they were conditions that suited him perfectly.

As regards my own Tour, it has been incredibly frustrating. I kept my cards close to my chest up until now, but I came into this race at my best level ever, both mentally and physically.

I rode almost the perfect first two weeks, up to the Pyrenees. We were incredibly happy; I was in the best position I have ever been in after all the time trials and going into the mountains, where I usually take back time. We were optimistic as normally the third week is my strongest week. But once we were into the Pyrenees, it became clear that something was very wrong. I felt very strong for the first two hours or so of the stages, but then completely ran out of energy.

I know it isn’t a problem with my form as I feel very good at the start of each stage, but there is definitely some kind of fuelling issue. We have to see whether my body is not digesting food properly or whatever.

We tried to work out what was wrong and to change things for the Alps, but the same thing happened again on Thursday. Friday’s stage was a bit better, though: I felt very good at the start, attacked early on and was part of a four-man break. Other riders came across to us and then as the stage went on, I started to fade again. But I did feel a clear improvement and will go all out on Saturday to try to get a stage win.