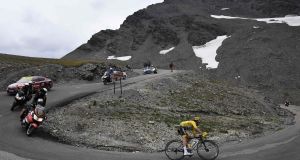 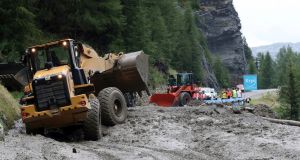 Workers use diggers to clear the road at the 19th stage of the Tour de France on Friday. Photograph: Thibault Camus/AP

What was seen as one of the most important battles in this year’s Tour de France was curtailed on Friday with the 126.5-kilometre race from Saint-Jean-de-Maurienne to the summit of Tignes dramatically cancelled due to dangerous weather conditions.

The stage was called to a halt when huge amounts of hail fell on the descent of the high-altitude Col de l’Iseran, rendering the route dangerous. There were also reports of landslides depositing debris on the road.

“There was no way through,” the Tour director, Christian Prudhomme, said. “They could not pass that.”

Colombian rider Egan Bernal (Team Ineos), who had started the day second overall, had attacked on the uphill and distanced the other contenders. The race leader Julian Alaphilippe (Deceuninck – Quick-Step) had been put into difficulties, but his intention to try to regain some of the lost time on the descent prior to the final climb was derailed when the organisers notified the riders that the stage was being stopped.

Although no stage winner would be named, the organisers took the decision to apply the time gaps which had existed at the top of the Col de l’Iseran to the general classification. That saw Bernal’s advantage at the summit carry him into the yellow jersey, becoming the third Colombian rider to do so.

The extraordinary developments underline how exposed professional cycling is to the forces of nature. Bernal now carries a lead of 48 seconds over Alaphilippe into Saturday’s final mountain stage.

Defending champion Geraint Thomas, also on Bernal’s Team Ineos, has one minute 16 seconds to make up, with Dutchman Steven Kruijswijk (Jumbo-Visma) a further 12 seconds back.

Frenchman Thibaut Pinot (Groupama-FDJ), last Saturday’s stage winner, was forced to withdraw from the race due to a muscular problem.