Dan Martin: Regrets? I’ll have a few, but too few to mention

There have been low points along the way, but this has been an amazing Tour for me 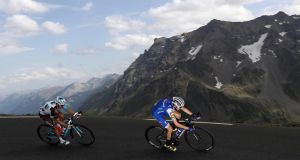 “It might sometimes looks like myself and Romain bardet are racing together as we take turns to attack.” Photograph: Bryn Lennon/Getty Images

The Tour is nearly over, Paris is beckoning like a beacon on the horizon. We’ll reach the Champs Elysees tomorrow, but first there’s the not-inconsequential matter of the time trial in Marseilles.

Some riders are just thinking of the end of the race but it’s obviously a different story for me. I’m sixth overall and I have to race as hard, and as fast, as I can.

My aim is a simple one: to go all out for the best possible time. In truth, I think it’s difficult to change my position. I’m kind of stuck in no-man’s land with a minute and one second between me and the rider in fifth, Fabio Aru. The rider behind me, Simon Yates is over two minutes back.

Yet, it’s going to be run off over 22.5 kilometres and a lot can happen. You could have a really bad day and lose a lot of time. It is going to be an interesting race.

Aside from this year’s result, I want to do my best possible performance for another reason. Some day I will hopefully be racing for the yellow jersey in the final time trial, so it is important to get absolutely everything out of each time you do these races against the clock.

Looking back at the last few days, it’s been quite up and down. The rest day on Monday wasn’t the best for our team as we had a couple of guys fall sick. Our former world champion Philippe Gilbert was violently ill for the whole day and wasn’t able to start on Tuesday.

That ended up being a big factor as he would have been crucial in protecting me in the crosswinds. Afterwards the team got a lot of stick for not looking after me better in the wind. It looked to some that they were waiting for Marcel Kittel, who was dropped on the early climbs, but in reality that wasn’t the case. They had been all so weak from the illness that they simply couldn’t stay in the peloton.

One who could was my teammate Jack Bauer, who did an incredible job to protect me as much as possible. But we just lost each other at the critical moment when the hammer went down into the winds.

I got a baulked by a couple of guys moving up, and then I had to slam the brakes a bit just as the group was splitting. It was unfortunate to lose that 51 seconds and it proved crucial in the end. But these things happen. We got our fair share of good luck, and we also got our fair share of bad luck in this race. That was a big dose of bad.

By Wednesday’s stage, which went over the legendary Col du Galibier, I felt a hell of a lot better. It’s one of the most iconic climbs in the Tour de France and I was pleased that my legs felt good from the start.

The day was a real war of attrition, particularly after Alberto Contador and Nairo Quintana attacked on the day’s middle climb. By the time we got to the final ascent it was epic. We climbed something like 35km in total, with a 5km flat section in the middle. The Col du Galibier is brutal and, at over 2,600 metres, the altitude really takes its toll toward the top.

The air is super thin up there. If you dip into the red too much, you really pay for it. I felt really good and thought I’d test the legs with an attack, and also see how Team Sky would respond. They weren’t setting an especially hard tempo so I thought they were maybe having a bad day.

I ended up almost having a one-two tactic, taking it in turns to attack with Romain Bardet, Chris Froome’s biggest rival.

In the end I was with the guys at the top of the hill, but we caught Contador at the summit and he then allowed a gap to open ahead of me on the second corner of the descent. I wasn’t able to close that gap - on that downhill, it was so fast that as soon as you lose the wheel, it was game over.

I ended up losing 30 seconds to the Froome group, which was frustrating. I am still learning, I think. Maybe it was a little lapse in concentration again, but the outcome was frustrating. My legs were better that the general classification result suggests, but that’s the way it goes.

Thursday’s stage was another summit finish on the Col d’Izoard, a legendary climb. Bardet started the stage third overall, just 27 seconds off yellow, and his Ag2r La Mondiale team were determined to give him every chance to take over as race leader.

They drilled it, setting a really vicious pace, which really saps the energy. At the bottom of the climb everybody was just dead, completely worn out. It has been such a heavy Tour. But then I saw that Aru was in more trouble than I was, so I decided to try to push the pace, and put some attacks in.

I was also thinking about the stage victory. The King of the Mountains Warren Barguil had got away and I thought that maybe the main contenders would let me get away too, because I wasn’t an immediate threat in the general classification. Yet in the end Sky and Froome chased me down; they obviously still view me as a threat.

I got gapped by Froome, Bardet and Rigoberto Uran at the end, but was proud with how I rode on what was such a beautiful climb and such a beautiful stage. I think Bardet and myself were the only two guys who were really attacking Sky, possibly because everybody was just so tired at that stage.

Yesterday’s stage to Salon de Provence underlined that. The start was really aggressive and people were getting dropped left, right and centre while the breakaway was being formed. It got clear, while the main bunch rode to the finish, not really trying to get it back. I don’t think I have ever seen a Tour de France peloton so shattered.

Everybody was just exhausted and trying to get through the stages. A lot of guys were really hurting at the finish line.

Looking at the race as a whole, it’s been a real rollercoaster. There were some real high points. One was the atmosphere among my QuickStep Floors team. It was such a great race for us. We had five stage victories with Marcel and there has been such a great camaraderie throughout.

I think there were just two or three stages when we haven’t had somebody in the top 10 in the stage result.

Personally I’ve obviously had a great performance. I’ve taken a lot of satisfaction out of how aggressive I have been. I’ve always raced like this, but now I have found out that I can do it in the Tour de France, the toughest race in the sport. To show my true colours at the highest level has been really good.

Because of how I have been riding, I’ve also seen a lot of respect from the other team leaders. Myself and Romain have got on well. We aren’t teammates, but it might sometimes looks like we are racing together as we take turns to attack. There is really no agreement there at all, it’s just the way we are as riders and the way things have played out.

The fans by the roadside have also been fantastic. I’ve had people shouting my name throughout and the number of Irish flags by the side of the road the last few days has been a real buzz. It’s great that there have been people out there supporting me and I’m looking forward to trying to finish things off in style over the last two days.

In terms of low points, losing time earlier this week on the crosswinds stage was probably the biggest. Even more so than the day Richie Porte crashed and brought me down. That was just bad luck, it couldn’t be helped. However, I definitely could have avoided the time loss in the crosswinds. Having worked so hard to claw back all those precious seconds then to lose out in one fell swoop was really disappointing

I don’t mind saying that I definitely made a mistake that day. However, I am still learning. As long as you take the lessons and learn from them, I think you move forward and you improve. I’ve definitely learned that I can be a contender next year.

Coming into the race, nobody even mentioned my name. They didn’t see me as a contender for the yellow jersey, or even for the podium. I’m now leaving the race with a much bigger status. More importantly, I have a lot more respect from the rest of the peloton and I feel that one day I can actually take the yellow jersey all the way to Paris.

It’s hugely exciting for the future, and I look forward to seeing what happens next.