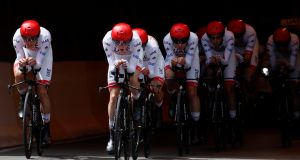 After seven stages of the Tour de France, Ireland’s Dan Martin is sitting 18th overall in the general classification. He has had a couple of scares but, as he writes in his first Tour diary, he’s satisfied with how things have gone thus far.

We are seven days into the Tour de France at this point, a week and 1,200km closer to Paris, and everything has gone well so far. I have taken some risks in order to save energy and not lost time because of that, which is good.

That’s not to say there haven’t been nervous moments in the race. Friday’s stage brought a couple of them. There was a bit of a scare at one point as the peloton split and I was caught in the wrong group, with most of the general classification guys up the road ahead of me. That meant a long chase to get back up to them. If we hadn’t caught them it could have been serious.

To be honest I don’t really know what was going on to cause that split. It was one of those situations you think back on and it doesn’t make much logical sense. There was a headwind at the time, and with those conditions there shouldn’t be gaps opening in the peloton.

I don’t know for sure what the reason was but if you asked me to guess I would say TV motorbikes. At times they get way too close and drag the riders along in their draught, ramping up the speed.

On reflection I guess I had fallen asleep a bit in that I shouldn’t have been back there. Even if it didn’t make sense that the split happened when it did, most of the time the Tour de France doesn’t make any sense. It’s that sort of race.

I had a bit of good fortune in that Nairo Quintana had stopped for a pee before the split happened, thinking also that it was a safe point in the race. Because he was caught out, his team dropped back to help him and that in turn helped me get back on.

In the Tour de France you have to ride your luck. That’s a big part of the race every year. Good things happen, bad things happen, and you have to cope. I had some bad luck the other day when my bike broke at the wrong time, then on Friday we had some good luck. We are riding on luck each day, really. Every stage I have been saving a little bit of energy riding in a calculating way, and those energy savings could all add up over the course of the race.

But with that, sometimes you calculate and you don’t actually get the maths right, especially when things happen that don’t make sense. Obviously from now on I just have to be a bit more aware, and just remember that anything can happen at any time.

The other scare on Friday’s stage was when I was right behind my cousin Nicolas Roche when he crashed; I was literally on his wheel and suddenly he was flying through the air in front of me. I had to take evasive action. I’ve no idea what caused it.

It is never nice to see any rider fall. I saw Chris Froome have a really big crash last month at the Critérium du Dauphiné and that was frightening. Myself and Nico are obviously pretty close and seeing that happen to him, I was a bit worried for a few kilometres. My mind finally was put at ease when I saw him back in the group after that. But it underlines again that anything can happen in the Tour.

Looking at the race as a whole thus far, I’m pretty happy with how it has played out. The team time-trial on day two wasn’t amazing for our UAE Team Emirates squad, but we didn’t lose as much time to the majority of general classification riders as we did last year. We even took a bit of time from some riders. And in terms of my sensations, I feel good physically, and mentally I’m very fresh and relaxed.

As I said before the race, the first 10 days is about staying out of trouble and losing as little time as possible. Thursday’s stage to La Planche des Belles Filles was the first summit finish and the first real chance for people to see the form of other riders.

When we got to the last two climbs, the climbers were pretty fresh for the final and it went very fast. I felt very comfortable, but the final ascent was just a strange type of climb and very different to what we are going to see in the future.

Because of the steepness it was a very explosive effort. It was also on a constantly changing gradient, which you won’t really see later in the race. And having sections on dirt roads was also very unusual. Many decades ago those sort of dusty roads were common, but now they are very rare.

I finished 14th, but the result was a bit misleading. When Julian Alaphilippe attacked, I lost a bit of position. I didn’t realise that when we got on to the dirt that the roads were going to be so flat and fast. The group basically stretched out into one long line and I was just caught a little bit too far back. I was trying to play catch-up from that point. But, that mistake aside, the important thing is that the legs were good.

Those watching would have seen the strong performance of year’s winner Geraint Thomas. He’s in a good position because his squad had a fast team time trial. He took those extra seconds on Thursday, and while those seconds are not going to matter too much overall, he is going to have a psychological advantage going into the time trial on stage 13.

But it’s important to remember that it’s very early on at this point. There are some really big climbs to come later in the race, and, really, we are only getting started. There are still two weeks to go, over 2,200km to Paris. Everyone is relatively close to each other and nothing is decided yet.