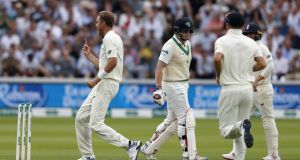 No visiting side has ever won its debut Test match at Lord’s but for a short time on Friday the thousands of Irish supporters here thought their side was about to do so.

Stuart Thompson’s first ball of the third day swung past Oliver Stone’s bat and demolished his stumps, but at the non-striker’s end Stuart Broad would have grinned and noted the reversal of fortune.

Twenty-four hours earlier Ireland had toiled in record temperatures as England batted all day to amass the biggest total of the game. Now they were about to face Broad and Chris Woakes in conditions made for their type of fast accurate seam bowling.

The floodlights were already on as the muggy overhead atmosphere punctuated by showers turned the pitch into a seamer’s paradise.

Sadly for the Irishman who tends Lord’s, Dubliner Karl McDermott, his first Test pitch was described as “substandard” by England captain Joe Root. He went on to complain that it “was not even coming close to providing a fair contest between bat and ball”.

Ireland now faced a target of 182 to win, which had only ever been achieved five times at the venue, and only once by a visiting team. The other instances would have been on days four and five of a Test, while this game was still less than 160 overs old.

England still needed just 15.4 overs to whip out 10 Irishmen and secure a 143-run win. The 94-ball innings yielded just 38 runs, the lowest total made a Test in 130 years of Lord’s Tests.

“We’re gutted”, admitted Ireland captain William Porterfield. “We’re gutted because we know the position we had put ourselves in to win the game. That’s tough to take,” he said.

“We knew with the lights on, we’d have to dig deep, and if we got a few down it would be for the lower-middle order to put it back on them. But that wasn’t to be, fair play to them, how they bowled.”

Ireland’s opening partnership saw off the first four overs from Broad and Woakes, that stand of 11 turning out to be the best of the innings.

The English duo expertly used the seam to remove the batsmen in a display that no side in the world would have resisted. Former England captain Alastair Cook said England would have taken seven or eight wickets off any side in the conditions obtaining in that session.

Porterfield went for two, while James McCollum played a couple of trademark drives before he nicked off to a brilliant Woakes outswinger for 11, the only Irish batsman to reach double figures.

First innings top scorer Andrew Balbirnie edged to slip where Root held the first of four catches, while another unplayable delivery by Woakes claimed Ireland’s best hope, Paul Stirling. The second ball he faced nipped back and clipped the top of the bails.

Gary Wilson made a small footnote in the history of the game, joining Jonny Bairstow in scoring a pair, an unwanted distinction for the respective wicketkeepers. The CSNI man’s forgettable Test comprised just six balls over two innings.

Kevin O’Brien seemed rattled by a Broad bouncer that hit his helmet, and he was soon pinned back on his stumps by a ball that came down the slope. He didn’t even consider reviewing the leg-before wicket decision.

On 24 for six, Ireland were still two runs behind the lowest Test score of all time, while even the Irish record first-class low – 25 all out against Scotland at Sydney Parade in 1965 – was still in danger.

Mark Adair ensured those humiliations were avoided and his six off Broad at least gave the stunned Irish support something to cheer.

The tailenders were unable to arrest the dramatic collapse and the innings was hurried to a close in just 94 balls, the second shortest in history.

Despite the forgettable final session, Ireland’s first appearance at cricket’s Ceann Arus was great cause for celebration and hope for the future.

Root told Ireland to take heart from an “outstanding” performance over the two and a half days.

“They put us under pressure at several points in the game,” he said.

“We were put under pressure by some very good bowling by Ireland who exploited the conditions well.

“I can see them upsetting some bigger sides in the near future.”

Ireland next play a Test match in February, in the Sri Lankan city of Galle.