Dan Martin’s Tour diary: Staying focused on and off the bike is key

Having placed sixth overall, I feel like it’s mission accomplished for the Pyrenees 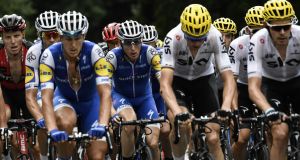 Friday was good fun out there. I think it was the first time in the Tour you have seen so many guys attacking each other. The stage was only 2½ hours long, covered three big climbs, and it was flat out right from the start.

On the second climb Alberto Contador (Trek-Segafredo) and Mikel Landa (Team Sky) attacked, opening a big gap. We took it a bit easier and that is why they managed to gain a couple of minutes. There was a lot of tactics going on between everybody and nobody wanted to ride.

I felt it was a bit weird how the French Ag2r La Mondiale team let Landa come back into the race so much. I thought they would be prepared to protect Romain Bardet’s position a bit more, but they didn’t chase. Personally I was feeling a hell of a lot better than Thursday. The difference was pretty incredible, although I am still not completely over my injuries from last week’s crash. It’s still hard to accelerate out of the saddle.

Because of that, I decided to really set a hard tempo on the last climb. I knew if it was stop-start, guys sprinting and stopping, that really wouldn’t be good for me. So I thought I’d put everybody in the red, just ride a hard tempo and if the attacks came, then everybody would already be tired and wouldn’t be able to get as big a gap.

I basically set my sights on riding a time trial from the bottom of the steep part of the climb to the top, just get there as fast as I could. In the end I think the tactic worked out well.

Just before the summit Chris Froome (Team Sky) attacked hard. I was exposed after riding so hard on the climb and was distanced for a while. I was a bit worried as the gap opened up, but I also figured that they wouldn’t ride like that to the finish because Sky had no reason to close the gap with Landa in the break. Also, race leader Fabio Aru wasn’t going to sit on the front and ride.

I also figured that maybe they would attack each other, but they would always have that pause in between each time. In addition to that, I knew the stage, having ridden it back in May. As there wasn’t a downhill straight away after the summit, that aided me. I knew I had to dig really deep in the first one or two kilometres after the top, but then I should be able to get back in the group. I came back quite quickly in the end.

I had a go soon afterwards, trying to get a gap on the descent. I got closed down by Simon Yates (Orica-BikeExchange) and Rigoberto Uran (Cannondale-Drapac). Uran had a go himself soon afterwards and got a gap. Everybody was working hard to get him back, so I just sat on the wheels and saved energy.

Me struggling to walk after Friday's stage

As soon as they caught him, there was a bit of a stall. I just hit them as hard as I could then, attacking hard and getting clear. I don’t know how many kilometres it was from there, but it felt like an eternity. It was pretty painful, but I knew I had the opportunity to take a bit of time and so I was fully committed.

Yates was able to get up to me a few minutes later, and to have that little bit of help in the last kilometres was nice. We held off those chasing behind, taking fifth and sixth on the stage, and gaining nine seconds on Aru and the other contenders behind. It was actually a lot of fun.

I feel like it’s mission accomplished for the Pyrenees. If you had told me two days ago that I would be closer to the yellow jersey leaving the Pyrenees than when I started, I would be almost talking your hand off. I would have been really, really surprised.

Considering the injuries that I had last Sunday, it has been a very good two days for me. I hope that after the rest day on Monday, I can really be back in the game and race more like I normally do.

Why the tour is the hardest race in the world

The Tour de France is known as the toughest bike race going, but there are others which are more taxing physically, in terms of the route. But what makes it so gruelling is the sheer scale. To give one example, most people don’t understand the amount of travelling that we end up doing. After Thursday’s stage we had a 2½, nearly three hours’ drive. Before then I had a doping control at the finish line and then a shower.

In the end I didn’t end up getting to the hotel until a quarter to nine. Then I had a massage, and I only ended up getting dinner at 10.30pm. This morning there was an hour and a half drive to the start. That’s an extreme example – it isn’t always so much – but even on the days when our hotel is 10km from the finish, it still takes half an hour because of all the traffic.

Then there are all the people who come to see you – the fans, the media. It’s absolutely hectic every day. When I crashed last Sunday, I had TV crews and journalists chasing me to the team bus after I finished. It’s every day. Around the race there is just intense media attention all the time: you are under the spotlight constantly.

The actual most peaceful part of the race is during the race, although with all the spectators by the roadside you really have to concentrate. On Sunday one of them stepped out and I hit them with my shoulder, so you have to stay focused. It’s just relentless; you are on the go all the time. It’s vital to keep your concentration, both on and off the bike.

Some riders just don’t like the race at all. That includes the current race leader Aru, who first rode it last year and didn’t get a good first impression. He isn’t the only one. There are some on my QuickStep Floors team who are good enough to vie for a Tour de France place but they don’t want to, because they have ridden it in the past and didn’t enjoy it. It just doesn’t suit their style of racing. It is definitely a different style of racing to anywhere else.

My plan now is to keep saving energy where I can, to keep recovering, and to really give it everything in the final week

I rode it for the first time in 2012 and actually didn’t like it at all. I felt out of my depth. But when you come back the second time, you cope better mentally. The following year, in 2013, I took a stage win and have been relatively successful every single edition.

I feel there is a certain technique of racing the Tour de France, different to all other events.

What helps is to relax as much as possible when you can. Our hotels have been pretty good during this year’s race – the organisers ASO have been much better in ensuring that than they were before. We are also lucky to be sponsored by a mattress company, Latexco. Because of that we have the same bedding and the same mattress brought to the hotel for us every night.

We also have portable air conditioning units as well so, if we are in a hotel without that, we have our own. The team does everything to make it as easy as possible for us and over the three weeks of the Tour, that can really help.

My plan now is to keep saving energy where I can, to keep recovering, and to really give it everything in the final week. I’m feeling better and better, and there’s plenty of racing still to come.

Stage result: Sixth, one minute 39 seconds behind winner Warren Barguil (Team Sunweb), and nine seconds ahead of the Aru/Froome group.